Homebuyers saving for deposits during pandemic and 70% plan to buy in 2021, survey finds 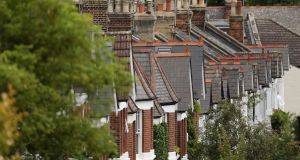 22 per cent of people surveyed said they believed prices would fall over the next year. File phototraph: PA

Prospective homebuyers have mostly been unaffected by the economic impact of Covid-19, according to a survey by MyHome.ie.

Some 58 per cent of would-be property buyers have been able to save more money for a deposit since the advent of the pandemic than they would otherwise have done, the survey of 2,233 people found.

Sentiment regarding house prices has shifted significantly since the summer, MyHome.ie said. In May, 68 per cent of prospective homebuyers predicted prices over the next year would fall by more than 5 per cent. Only 22 per cent think this will happen now.

More than seven in 10 prospective buyers are planning on purchasing a property in the next year.

But housing supply is still their most pressing concern, with 42 per cent saying that an increase in available stock would encourage them to buy a property now.

The survey also found that about three-quarters of respondents – 76 per cent – believe the Government could do more to help the property sector. This figure is unchanged since August.

Covid has had an effect, however, on the way in which people plan for home life, with 46 per cent saying they will make sure their home has an office.

“These survey findings show us that prospective homebuyers are still largely insulated from the economic effect of Covid-19, but the virus has still had a significant effect on the sector,” said Angela Keegan of MyHome.ie, which is owned by The Irish Times.“Supply issues are still a huge concern due to the suspension of construction activity during the first lockdown,” she said.

Ms Keegan said that the earlier a Covid-19 vaccine is approved and distributed, the better for the market.

“Once the economy gets back up and running we will hopefully see an increase in construction activity which would redress the balance between supply and demand.

“Our analysis shows that stock levels are down by 27 per cent year-on-year, which is particularly concerning. We need this to be addressed.”