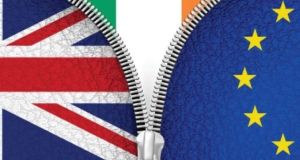 Brexit could cost Irish households up to €1,400 a year on average as prices rise, a new study by the Economic and Social Research Institute (ESRI) has found. And lower income families would fare the worst.

The research focuses on the consumer side of Brexit and the likely impact of trade barriers on retail prices here. Using a database of more than 4,500 products imported from Britain, it examined the potential impact of two Brexit scenarios on household budgets.

It found that the price of bread and cereals in the Republic could rise by up to 30 per cent in a hard Brexit scenario, while milk, cheese and egg prices could increase by 46 per cent .

A range of products from meat and sugar to confectionery, coffee, tea and mineral water were likely to increase by 20-30 per cent.

The overall effect of these changes would increase the average cost of living for Irish households by between 2-3.1 per cent, which, in cash terms. means an annual cost of between €892 and €1,360 per household, the ESRI found.

The lower figure assumes no tariffs and takes account only of likely higher trade costs due to customs controls, new regulation and other issues. The higher figure assumes a hard Brexit and includes the impact of WTO tariffs.

The research, commissioned by the Competition and Consumer Protection Commission, also found lower-income households would be worst hit by higher prices because they typically spend a great proportion of income on basic items.

Up until now, fears about the impact of Brexit on the Irish economy have tended to focus on the challenges to exporting firms. However, as Britain is a significant source of imports, particularly food imports, into the Irish economy, the imposition of tariffs or other trading costs as a result of Brexit is likely to translate into higher prices for consumers here.

“As Ireland imports a considerable amount of food products from the UK, a hard Brexit could have an immediate impact on the cost of living,” the ESRI’s Martina Lawless said.

“Unfortunately, we find that this impact would likely fall disproportionately on lower-income households,” she said.

Chairwoman of the Competition and Consumer Protection Commission Isolde Goggin said putting a price tag on the cost of Brexit for Irish consumers made its potential impact more tangible.

She said a “huge degree of uncertainty” about the consequences of the British decision to leave the EU remained but stressed that because of the “high degree of integration” between the Republic and Britain there was no doubt the impact would felt by Irish consumers.

“There is still a huge degree of uncertainty; however, the better our understanding of the potential impact, the better Ireland will be in a position to prepare,” she said.

“The intention is that the results of this study will help inform a wider understanding of the potential impact of Brexit and assist in ensuring Ireland preparations are as comprehensive as possible.”

She said that while the research suggests that Brexit could add as much as €1,360 onto household bills, much would depend not only on the eventual deal reached, but on the level of domestic competition, the availability of alternatives to particular products and consumer’s responses to changes in prices.