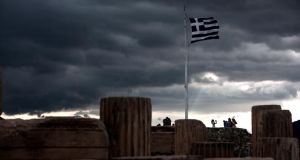 More than four months after a Syriza-led government swept to power in Athens, Greece is facing a cash-crunch as negotiations with EU and IMF lenders about a fresh reform package have foundered.

Greek Prime Minister Alexis Tsipras spoke to Russian president Vladimir Putin by phone on Friday, less than 24 hours after Greece announced the postponement of a €300 million payment to the IMF.

The two leaders discussed plans for energy cooperation, according to officials, with Mr Tsipras confirming his participation at an economic forum in St Petersburg on June 18th – the same date as the next scheduled eurogroup meeting in Luxembourg.

More than four months after a Syriza-led government swept to power in Athens, Greece is facing a cash-crunch as negotiations with EU and IMF lenders about a fresh reform package have foundered.

With Mr Tsipras due to address the Parliament in Athens on Friday evening, markets fell sharply at the news that Greece had missed its IMF repayment – the first time a bailout country has missed a debt repayment since the start of the euro zone crisis.

Rating agency Fitch said yesterday that Greece’s decision to postpone June 5th payment and instead bundle its four payments due to the IMF this month in one instalment at the end of the month did not constitute a default. But while the move did not affect the country’s CCC sovereign rating, the agency said that the decision highlights “the extreme pressure on government funding”.

Nonetheless, markets fell sharply on the news, with two-year Greek yields climbing by nearly three percentage points to over 25 per cent.

Amid signs that a general election is becoming increasingly likely in Greece, a senior government minister raised the prospect of an election to end the impasse.

“The lenders want to impose hard measures. If they do not back down from this package of blackmail, te government ... will have to seek alternative solutions, elections,” deputy social security minister Dimitris Stratoulis, a hardliner in the government, told Greek TV, as an opinion poll showed that 37 per cent of people supported early elections as a way of resolving the standoff.

Earlier, economy minister George Stathakis said the latest deal, drawn up earlier this week by top level officials, including German chancellor Angela Merkel, was unacceptable, but stressed that his country did not want to leave the euro zone.

“Our government has a mandate to remain in the euro and get a better deal to ... try to change the terms of the agreement that we have with European partners,” he told BBC radio. “ Greece has to remain within the euro.”