Greek Crisis: ‘They said my pension would be paid but now bank’s closed’ 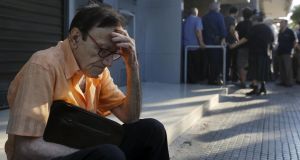 Giorgos, a 77-year-old pensioner from Athens, sits outside a branch of the National Bank of Greece as he waits along with dozens of other pensioners, hoping to get their pensions. Photograph: Yannis Behrakis/Reuters

Sitting on an upturned vegetable crate and clutching her blue deposit book, Vasiliki, a woman in her 80s, was among the small group of pensioners who had started gathering outside a branch of Alpha Bank in the seaside town of Loutraki on the first day of capital controls in Greece.

She had come in the desperate hope that someone would arrive to open the door so she could access her July pension, due on the same day.

Like the others waiting outside, she said she never figured out how to “use that machine”, pointing towards the branch’s ATM, leaving her dependent on her deposit book for all transactions. That meant she was unable to withdraw cash over the weekend when fears of impending capital controls saw Greeks rush to withdraw as much as ATMS would give them.

“I do all my business with the deposit book. I have nothing at home. They told me on Friday that my pension would be paid today. But now the bank’s closed,” she said.

Just hours earlier, the government had decided that the country’s banks would remain shut until July 7th, two days after a crucial referendum in which citizens will be asked whether or not to accept the demands made by international lenders in return for fresh cash Greece needs to stop it defaulting on its debts.

“God above will decide whether I live or die,” another pensioner and widower, Eleni, said when asked how she would get through the next few days. “I’ve only €10 in my purse and I don’t know what to do. I’ve no children and I can’t ask my sisters to help me because they all have health problems.”

While Vasiliki and Eleni seemed resigned to their predicament as they returned home upon realising that the bank wouldn’t open, others were left seething at those they blamed for the situation the country had found itself in.

“Our prime minister spoke of upholding our dignity when he called the referendum and where are we now? Standing outside the bank with no access to our money. Whoever was foolish enough to vote for those people in the last election will be even greater fools if they go along with the government and vote No on Sunday,” fumed Nikos, another pensioner.

Elsewhere, people were defiant in their support for the government, which seemed to have received a boost following European Commission president Jean-Claude Juncker’s appeal to Greeks not “to commit suicide because you are afraid of death”.

“When someone like Juncker goes on television to tell me I have to vote one way, then I’ll do the opposite. That’s what we Greeks do. He tried to get his people elected in the last election and he failed. Why does he want a Yes vote so much? Doesn’t that tell us something?” said pensioner Iakovos Myriagos after he withdrew his daily limit of €60 from an ATM in the city of Corinth, which had been replenished at noon.

“We’re shocked. So confident that it would never reach this point, we didn’t even bother trying to withdraw money over the weekend,” said Kostas, who runs a pet food shop.

He said the controls meant he would no longer be able to import the €2-3,000 worth of stock from France that he sells every month. “I’ll now have to use Greek suppliers. They’re not necessarily cheaper, but they don’t have the same products.”

Panayiotis, a policeman, said there was no option but to vote No, against the lenders’ proposals. Years of spending cuts meant that he and his colleagues now had to pay for repairs to patrol cars out of their own pocket.

“By halting funding for our banks, they’re trying to choke us. They’ve cut enough off pensions and cutting more won’t solve Greece’s problems and we’ll be in the same boat in five years’ time. We need growth,” he said.

Any Greek growth strategy will depend heavily on tourists, who many now fear will think twice about taking that Greek island holiday this summer, even though the €60 withdrawal limit will not apply to tourists or holders of foreign credit or cash cards.

After he successfully took out €300, Japanese tourist Naito Masatuki’s only problem was that most of Corinth’s shops and supermarkets were closed to mark the feast day of the city’s patron, St Paul. “I’m not worried. I’m keeping abreast of developments via Japanese media and I plan to continue my holiday as planned.”