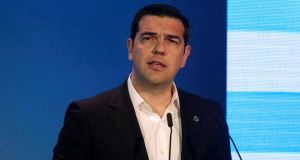 Greece’s prime minister, Alexis Tsipras, whose government has been implementing a series of “milestones” set out by lenders. Photograph: Alexandros Avramidis/Reuters

Euro-zone finance ministers gather in Luxembourg on Monday for a eurogroup meeting expected to be dominated by Greece as the ministers assess the state of play of the third Greek bailout.

Minister of State for Financial Services Eoghan Murphy will represent Ireland at the meeting as ministers consider unlocking €2.8 billion in bailout funding to Athens amid continuing uncertainty about the status of the International Monetary Fund’s involvement in the Greek bailout package.

The Washington-based fund is preparing to take on an “advisory” role in the Greek bailout, rather than as a full participant, Reuters reported on Sunday, amid continuing divisions between the IMF and Greece’s European Union lenders about debt relief for the country.

Euro-zone countries led by Germany, which is facing elections next year, are opposed to granting the level of debt relief sought by the IMF, which has repeatedly argued that Greece’s debt is unsustainable.

The next step forward for the Greek bailout was discussed at the fringes of the IMF and World Bank autumn meetings in Washington last week which senior euro-zone officials attended.

The IMF’s Europe director, Poul Thomsen, said on Friday that the fund was still “fully engaged” with Greece. He added that while the IMF continued to insist on debt relief, this need not come in the form of principal reduction.

“We have not changed our mind on this. This discussion we will have in the coming months,” he said.

Negotiations have been ongoing between officials representing Greece’s lenders and the Greek government about concluding the second review of the third bailout programme, a development that would unlock up to €2.8 billion in funding for Greece.

The Greek government, led by Syriza leader Alexis Tsipras, has been implementing a series of “milestones” set out by lenders, including announcing the privatisation of utilities and telecoms assets and further pension reform.

But tensions continue in the country over the continuing programme of reforms, with police officers controversially using tear gas against protesting pensioners last week.

Syriza later this week meets for a party congress, as Mr Tsipras continues to face challenges in keeping his most radical-left members on board during the bailout discussions.

In a possible boost for the economy, the country’s economy minister, George Stathakis, said last month that Greece would qualify for inclusion in the European Central Bank’s quantitative-easing programme early next year if the second review is completed by the end of the year. The ECB has said it will not make a decision until the eurogroup provides further clarity on debt relief for Greece.

Greece’s third international bailout was agreed 14 months ago after months of fractious negotiations between the EU and the Syriza government which swept to power in January 2014 on an anti-austerity message.

The country has also found itself at the centre of the migration crisis with hundreds of thousands of refugees passing through Greece from Turkey over the past year as they escape war in Syria. The Greek government has been responsible for establishing EU-devised “hotspots” at many of the entry points for refugees, though the EU-Turkey plan agreed earlier this year has led to a dramatic drop in the number of refugees arriving to Greece.

On Tuesday, euro-zone finance ministers will be joined by representatives from all 28 EU member states, including Britain, for the second day of meetings in Luxembourg at which the controversial new Basel banking rules will be discussed. The European Commission is opposing new standards being promoted by the United States which would increase capital requirements for banks.

Concerns have grown in recent weeks about the health of Deutsche Bank, while worries about the state of the Italian banking system continue.

1 Coronavirus: Property rental in the jaws of the epidemic
2 Collison brothers worth an estimated €2.9bn each
3 I want to change my will quickly in case I fall ill. Do I need a lawyer?
4 WhatsApp limits message forwarding to slow spread of misinformation
5 Kerry fintech Taxamo agrees deal with Deloitte
6 Purchase limits eased at supermarkets as trading levels ‘consistent’
7 WeWork sues SoftBank after $3bn tender offer falls through
8 Irish back pain medical device group to pull stock market listings
9 How can the State support me now I’ve lost my job?
10 Central Bank freeing up rainy day money could facilitate up to €16 billion in lending
Real news has value SUBSCRIBE