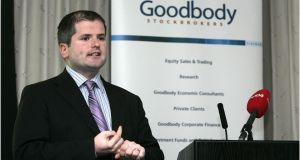 The Government’s plan to reopen the economy has been criticised as overly cautious.

Goodbody Stockbrokers said the lifting of restrictions here has been slower than in other countries and that this would hit the speed of recovery.

“Ireland’s success in controlling the virus suggests that the reopening plan could be accelerated, thus limiting the longer-term economic damage to jobs and the public finances,” the firm’s chief economist Dermot O’Leary said.

The economy began the process of reopening this week after a two-month shutdown to limit the spread of Covid-19. However, under the Government’s five-phase plan for unlocking restrictions at three-week intervals, many sectors and industries will remain closed until later in the summer, as late as August 10th in some cases.

In its latest outlook for the economy, Goodbody said “significant damage” had already been done, while some key sectors will not be able to return to full capacity due to social distancing measures for some time.

“The most dramatic effects have been in the labour market, where 40 per cent of the labour force is on some form of government support,” it said,

The brokerage is predicting the economy will contract by close to 11 per cent this year, in line with Government forecasts, with core domestic demand expected to contract by 12 per cent.

Large declines in consumption and investment are expected, it said, while government spending will provide some offset.

Mr O’Leary said recovery was likely to be patchy with significant government support necessary beyond current timelines. He said the Republic had been relatively late in introducing additional policies to support businesses and while the various initiatives, such as credit guarantees, grants, and commercial rates write-offs are welcome, more will need to be done to avoid widespread business closures.

Goodbody’s report notes that while multinationals play a big role in the Irish economy, most firms in Ireland are SMEs with micro-sized firms – those with fewer than 10 employees – accounting for 92 per cent of non-financial firms.

“These firms have vastly different balance-sheet and cashflow characteristics and are more likely to be impacted by the social distancing measures that have been introduced,” it warned.

1 Aer Lingus confirms job cuts due to ‘decimation in demand’
2 Why is Germany suddenly embracing its inner Keynesian?
3 Prospect of foreign travel highlights remaining restrictions here
4 ‘I have a talent for justifying purchases’
5 Property price drop of up to 12% this year a ‘reasonable’ assumption – McDonagh
6 Help, I’ve no PRSI stamps – can I still get a pension?
7 National accounts record the calm before the storm
8 Bad posture working from home easy to acquire
9 Stocktake: Bored punters are dabbling in stocks
10 Builders may end up in complex disputes following suspension of most construction
Real news has value SUBSCRIBE