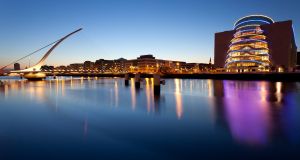 The number of financial sector workers in Britain and mainland Europe looking to relocate to Ireland surged in the months after the UK voted to leave the European Union, according to data from international jobs site Indeed.

With many major financial institutions considering a move to Dublin on the back of Brexit, Indeed’s analysis reveals that job searches from the UK for senior financial roles in Ireland rocketed in the eight-week period after the vote to leave the EU last June.

6 Coronavirus: What happens when the lockdown ends in March?

11 Q&A: Can I still pass Covid on after I’ve been vaccinated?

13 Paul Howard: ‘Ross O’Carroll-Kelly was born out of anger’

20 Fintan O'Toole: The State has never got its head around the pandemic

23 Getting gardaí to enforce quarantine in homes ‘problematic’

24 Fauci reveals what it was really like working for Trump

26 Kathy Sheridan: This is not the time for a Border poll

27 Q&A: How many people are travelling into and out of Ireland?

29 Walk this way: 17 tips for getting the most from your daily lockdown outing

30 Q&A: What are the new Covid travel rules and how will they work?

31 The chickpea stew that broke the internet in the US is here. Give it a go

33 Tax relief: Expenses you can claim to try reduce your bill

38 Eat, move, think: What you need to know about children’s health (teenage girls)

39 Enda Kenny: Border poll is ‘meaningless’ without putting in work on living together

40 How did a remote Mayo town become Ireland’s most Covid-infected place?