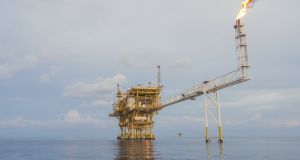 A new “petroleum production tax” is cast to ensure that discoveries made under future exploration licences will lead to an increased financial return to the State and earlier than under current arrangements. File photograph: Getty Images

The Government has unveiled draft laws to increase the maximum tax on oil and gas fields in Ireland to 55 per cent from 40 per cent.

A new “petroleum production tax” is cast to ensure that discoveries made under future exploration licences will lead to an increased financial return to the State and earlier than under current arrangements.

The measure is set out among other new steps in the Finance Bill, which gives legislative effect to the Budget 2016 package last week.

Other provisions not in the Budget include a new grant for disabled drivers and passengers to compensate them for an excise duty repayment they lost as a result of a ruling by Europe’s highest court.

This grant will replace the excise duty repayment on fuel lost due to a ruling of the European Court of Justice.

The “petroleum production tax” will replace the profit resource rent tax which was introduced in the Finance Act of 2008.

A minimum payment of 5 per cent of annual gross revenues will be due annually once a field starts producing oil or gas.

It is understood the ultimate rate of tax and amount due will be determined on a “variable basis”, depending on the profitability of an individual field.

This will be payable in addition to the current 25 per cent rate of corporation tax that applies to the profits from oil and gas exploration.

The Government expects the tax will result in an increase to the maximum marginal tax take on a producing field to 55 per cent from 40 per cent.

A separate Finance Bill provision introduces an income tax exemption on vouched expenses incurred by non-resident, non-executive directors travelling in the course of their duties.

Although the Government accepts this is a departure from the general principle that expenses are taxable, it will argue that the exemption recognises the special role in corporate governance played by non-executive directors whose expertise and experience is of considerable value to the organisations.

Another Finance Bill measure will benefit thousands of Irish shareholders of Standard Life who incurred income tax liabilities in respect of return of value payments from the firm due to postal delays.

Such delays meant they were defaulted into receiving an income payment leading to a higher tax liability than if the payment was a capital payment subject to capital gains tax, which is charged at a higher rate than income tax.

The Finance Bill provision means the relevant Standard Life shareholders would have their payment treated as capital and subject to tax under capital gains tax rules instead of income tax.

The Bill increases the maximum value of a benefit-in-kind exemption to €500 from €250 in respect of a single non-cash benefit from an employer.

This will apply to vouchers employers sometimes give to workers by way of a once-off benefit at Christmas.

The Bill also provide a benefit to active foresters. Profits from the occupation of woodlands are generally exempt from income tax but the relief is specified relief for the purposes of the high earners’ restriction.

The Bill removes forestry from the restriction, but not for passive investors in forestry companies.