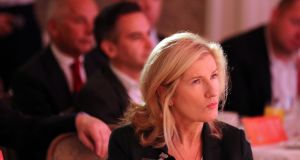 Catherine Moroney, head of business banking at AIB, at the PwC/Irish Times event.

Greater support for indigenous companies and progress on housing and health are core issues that Fianna Fáil wants to see addressed in Budget 2019, the party’s finance spokesman, Michael McGrath, has said.

Mr McGrath also reiterated his belief that it would be unwise for an election to take place here without knowing how Brexit plays out.

“We need to see where we stand before we thrust the country into a general election. We may know that in November, or by March. I personally believe we shouldn’t enter into the inevitable disruption and uncertainty that an election would bring while Brexit is hanging in the air,” he said.

Mr McGrath was speaking at the PwC/Irish Times tax summit in Dublin where he also said that abolishing the lower VAT rate for the hospitality sector was a big decision especially as it would have the biggest impact in terms of raising revenues.

“Increasing the special 9 per cent rate to 13.5 per cent would bring in €500 million next year so there is obviously a huge temptation for the Minister [for Finance] to do it. What he could also do is separate the activities to change it for, say, just hotels or restaurants only,” he said.

Mr McGrath said that with an overreliance on a handful of multinationals, more needed to be done to support SMEs, including an overhaul of the Employment Incentive and Investment (EII) and Key Employee Engagement Programme (“KEEP”) schemes and a review of the Capital Gains Tax threshold.

He said that with a growing affordability crisis, there was a need for increased intervention in the market to allow people to purchase homes at reasonable prices.

Speaking on the same subject, Margaret Sweeney, chief executive of Irish Residential Properties Reit (Ires), the largest private landlord in the Republic, said there was a “chronic supply shortage” across Dublin.

“We spend a lot of time in terms of going out and encouraging lots of companies to come to Ireland and welcome them, creating lots of jobs and we have to ensure there are homes for them all,” Ms Sweeney said.

The Irish Times London editor Denis Staunton told attendees that nobody in the UK knew exactly what was going to happen in the event of a no-deal Brexit.

“By their own admission, it is going to be a bit of a mess,” he said.

However, he added that no matter what the deal was, it won’t be the Chequers proposal, on which UK prime minister Theresa May was staking her reputation.

Mr Staunton also said the Government’s decision to play hardball over the Border was viewed dimly in Westminster.

“For many in Westminster, the view even among many remainers is that the Irish are being incredibly difficult and actually a bit ungrateful given that the UK helped to bail out the country when it got into trouble in 2008,” he said.

“While this is to be commended, we all must realise that the next two years will be a key time in determining the future international tax landscape,” he said.