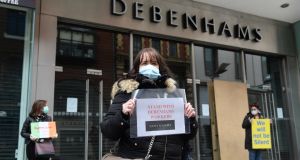 Debenhams staff protesting outside the Henry Street branch recently. Retail has been one of the sectors worst-hit by the Covid-19 lockdown. Photograph: Dara Mac Donaill

A major increase in State spending on training and employment support schemes is essential to combat the Covid-19 jobs crisis, and consideration should be given to providing the public with vouchers to spend in the worst-hit sectors of the economy, according to a report from a high-level official advisory group.

The report – entitled Preparing for Economic Recovery – is from the Labour Market Advisory Council, established this year by former minister for employment affairs and social protection Regina Doherty. It is charged with advising the Government on a response to the crisis in the jobs market.

Chaired by former senior OECD official John Martin, it includes representatives of the Irish Congress of Trade Unions, Ibec, the Irish National Organisation for the Unemployed and a number of senior businesspeople.

The report says the pandemic unemployment payment (PUP) – the €350 weekly payment currently due to continue until August 10th – should be gradually tapered down, though it warns this will cause difficulties for some recipients, especially those who do not qualify for ordinary unemployment supports.

A significant programme of advice and in some cases training will be needed to help people find new employment if their old jobs do not reappear, it says.

The temporary wage subsidy scheme should continue for longer, it says, and where possible companies should be encouraged to re-employ staff currently on the PUP. It will eventually need to be wound down in its current form.

A key recommendation is that specific supports are needed for companies that can only afford to take people back on a part-time basis, perhaps via introducing a reformed wage subsidy scheme or revamping the current short-time working scheme.

A major ramping-up of State training and advisory supports to the unemployed is essential through an expansion of work by Solas, the local education and training boards and higher education institutions, the report says, as well as a big expansions of internship and placement schemes.

Current incentives for companies taking on unemployed people or giving them internships would need to be expanded, it added.

Sectors which will not bounce back quickly, particularly those in hospitality, travel and tourism would need special supports, it said , and in some cases employees should be offered retraining to move to other sectors. Voucher schemes given to the public to spend in these sectors were worth considering, the report said, as well as straight cash grants.

The report points to the difficulty of directing supports to sectors where the future shape of consumer demand – and thus the long-term viability of companies – is unclear and says indicators need to be developed to assist with this.