Analysis: Growth will be primarily due to exports as domestic demand sluggish 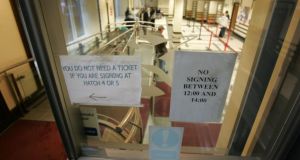 “Unemployment (both short- and long-term) began to fall towards the end of last year. If our forecasts prove to be correct, then this means an annual average below 300,000 unemployed in 2014.” Photograph: Frank Miller

In the ESRI’s latest outlook for the Irish economy, we forecast that growth will improve in 2013 and 2014. If we are right, growth, as measured by GNP, will amount to 1 per cent this year and 1.5 per cent in 2014. The corresponding growth rates for GDP are 1.8 and 2.7 per cent. As has been the case over the past number of years, this growth will be primarily due to increasing exports and we expect that this export growth will continue to be driven predominantly by the service sector. We are currently forecasting that domestic demand will grow by around 0.7 per cent in 2013 and 2014.

If the growth rates we forecast are realised, what will they mean for the Irish economy? One of the main impacts of the crisis has been a sharp increase in the numbers unemployed. We would expect to see some reduction in the unemployment rate to an annual average just below 14 per cent in 2014. Indeed, unemployment (both short and long term) began to fall towards the end of last year. If our forecasts prove to be correct, then this means an annual average below 300,000 unemployed in 2014.

1 Co Donegal hotel offers €2 rooms to locals to circumvent Covid-19 outdoor dining rules
2 Traffic chaos as ‘singing and dancing’ woman stops car in middle of motorway
3 Blackrock and Mulhuddart: How Covid-19 affected two Dublin suburbs
4 Mary McAleese: ‘I’m a bit of an ’oul interrupter. That’s what I hope to be’
5 More than 100 people gather in Co Donegal for anti-Covid-19 rally
6 How to fight the psychological fatigue of Covid-19’s second wave
7 Hundreds of thousands in China given ‘emergency’ Covid-19 vaccine
8 Man with electric scooter who died in Meath was due to get married in the coming weeks
9 Michael Harding: ‘Do I know anything? Very f**king little’
10 ‘No magic bullet’ to fight Covid-19 in next six months, says head of expert advisory group
11 Covid-19: Contact tracers to start looking into where people are infected
12 Two turnkey homes for sale on same street as owners leave Dublin
13 Susie Dent: ‘Jimmy Carr is incredibly rude to me. I took it as a compliment’
14 ‘The top of my finger was gone’: Fireworks a clear and present danger in Halloween run-up
15 Tour de France: Every yellow jersey winner must feel guilty by some association
16 Brendan Gleeson as Donald Trump: ‘A mediocre impression and possibly a great performance’
17 David McWilliams: The better the economy does, the more Covid-19 spreads
18 Covid-19: Fears grow over increased restrictions for cities and local areas
19 Juan Imhoff and Racing 92 leave it late to end Saracens’ reign
20 Miriam Lord: Restricted movement for Leo as Micheál finds his stride
21 Homely Monkstown original with garden oasis for €425k
22 People who fail to self-isolate should be fined for their ‘selfish behaviour’, says GP
23 Just four countries remain on green list: Where do we stand with travel now?
24 Five lessons I learned preparing my house for sale
25 Bank of Ireland sees about 2,000 staff apply for voluntary redundancy
26 Bill & Ted in middle age: ‘We felt if we did it with heart, it would work’
27 Salted caramel and apple: a perfect marriage for tasty swirl buns
28 In this strangest of recessions, what happens next for Ireland?
29 Eamon Ryan interview: ‘Climate action is where the jobs are going to come’
30 Kevin Babington: Learning to live again after life changed forever on Long Island
31 Ireland faces devastating blow due to our failure to develop ferry services to Europe
32 Manny Pacquiao’s office confirms Conor McGregor fight
33 Life in Level 3: What is happening under the new restrictions in Dublin?
34 Ross O’Carroll-Kelly: ‘I’ve never been much of a conversationalist, but I’m on fire with this woman’
35 Matt Williams: The sky is not falling in on Irish rugby - but Ireland do need a new plan
36 Visitor restrictions remain in place at National Maternity Hospital and Coombe
37 Dermot and Dave’s Dermot Whelan's mindfulness exposed as sly act of self promotion
38 Coronavirus: State at ‘tipping point’ in Covid-19 struggle, says expert medic
39 Trump to nominate Amy Coney Barrett to Supreme Court, CNN reports
40 Breda O’Brien: What if RBG had focused on persuading others that both lives matter?
Real news has value SUBSCRIBE