Shares decline at worst rate since 2011 but euro still robust 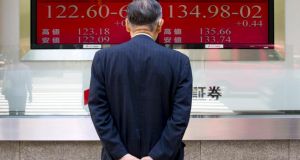 A man looks at screens displaying the dollar to yen and euro to yen exchange rates in Tokyo. The euro declined and share prices tumbled across Asia on Monday as Greece looked set to default on its debt repayment this week

Europe’s financial markets were jolted on Monday by the collapse of talks and imposition of capital controls in Greece, although initial heavy selling eased as investors judged there was still some way to run for the saga.

Banks and bond market borrowing costs for Italy, Spain and Portugal bore the brunt of markets’ fright that prime minister Alexis Tsipras’ calling of a referendum on further austerity demanded by euro zone creditors would see Greece leave the euro.

After an initial wave of selling, however, most markets recovered some ground. The one-day moves were large but looked pale in comparison to the events of 2008 or the last major round of Greek-spurred turmoil in 2011-12. Wall Street was set to open around 1 per cent lower while the FTSE Eurofirst blue chip index was down by just over 2 per cent overall.

“The European financial system now has much less exposure to Greece than in 2011 and 2012,” said Stephanie Flanders, chief market strategist for Europe at JP Morgan Asset Management. “It is also better equipped to deal with contagion to other countries -- and so are the countries themselves.”

Greece’s banks and stock market were closed on Monday and were expected to remain so until after the July 5th snap referendum called by Mr Tsipras on austerity demanded by euro zone partners. That didn’t stop investors from selling other related assets.

The Global X FTSE Greece exchange-traded fund (ETF) , a buyable security which tracks the Athens stock market, was down around 15 per cent from its Friday closing price. Euro zone banks fell 5 per cent in value, with the worst falls for Portuguese, Spanish and Italian lenders. Adding to the gloomy backdrop, China shares dived another 3.3 per cent, bringing the losses in the past two weeks to 22 per cent, with central bank cuts in interest and reserve rates on Saturday failing to calm jittery investors.

The worst fall in shares for six months and the 30 basis point rise in yields for other southern euro zone governments was the start of an acid test of policymakers’ hopes that, if

Greece does depart from the euro, the rest of Europe is isolated from the fallout. By mid-morning in Europe, there were a number of voices arguing that the sell-off represented an opportunity to buy shares cheaply in markets into which the European Central Bank will pump billions of extra euros over the next year.

“I think Greece will vote to remain in the euro, and the market seems to agree with me,” said Lex van Dam, a hedge fund manager at Hampstead Capital. “I was a buyer on the initial dip this morning in both the euro as well as the European stock markets, and continue to remain constructive.”

The euro itself proved resilient, recovering much of a roughly 2 per cent initial fall to trade just half a percent lower at $1.1102, well within the past month’s ranges.

It was helped by Switzerland’s National Bank confirming it had intervened to counter gains for the franc and by a fall in US Treasury yields that reflected speculation the Federal Reserve would hold off for longer in raising interest rates if the trouble in Europe worsens.

1 Parts of Brown Thomas and Arnotts to reopen next week
2 Should my mam wait for house prices to drop before buying?
3 Hangover for the drinks sector as pint sales go flat
4 Brother is dragging his heels as executor of uncle’s will - is there anything I can do?
5 Covid-19 mortgage breaks: What’s the catch?
6 Supermarkets see fastest pace of sales growth in 15 years
7 Revenue faces US drug company Perrigo over disputed €1.64bn tax bill
8 Irish whiskey sales near milestone of 12m cases a year
9 Finance chief who guided Tesco out of scandal to retire
10 Irish comic book artist designs face mask coverings for young flyers
Real news has value SUBSCRIBE