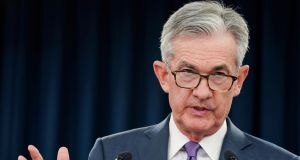 European shares inched higher early on Friday, with all eyes on a speech by US Federal Reserve chief Jerome Powell for signs that the central bank is on course to deliver another cut in interest rates next month.

With markets locked down ahead of the highly-anticipated address at the Jackson Hole symposium this afternoon, a 30 per cent surge for Peppa Pig-owner Entertainment One was among the few major share moves. That reflected a premium over the price agreed with US toy giant Hasbro in a deal announced overnight, and some analysts suggested it could point to some kind of counter offer, possibly from UK broadcaster ITV, whose shares rose 4 per cent.

Shares in Kloeckner & Co also jumped 11 per cent after a newspaper said Thyssenkrupp was in talks to buy the metals distributor to strengthen its materials trading business. That helped the pan-European Stoxx 600 index rise 0.4 per cent earlier, still more than 2 per cent down on the month but on course for its first weekly gain since July.

“A lot of optimism has been building up ahead of Powell’s speech and it is possible that markets are positioned to be disappointed,” said Craig Erlam, senior market analyst at Oanda in London.

Markets have seen wild swings in August as fears that the slowing economic effects of the US-China trade war could tip major economies into recession were countered by expectations central banks and governments will step in.

Minutes from the Fed’s July meeting have cooled money market expectations of a bigger half-percentage point cut in rates next month but also potentially left Mr Powell the room to be more dovish than the panel as a whole sounded. The FTSE 100 rose 0.6 per cent and the euro-zone benchmark gained 0.5 per cent. - Reuters