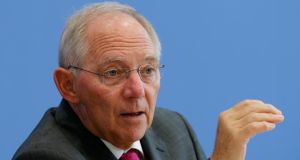 German finance minister Wolfgang Schaüble has dismissed fears that the euro zone crisis might be starting up again amid political turmoil in Portugal and pressure on Greece. Photograph: Fabrizio Bensch/Reuters.

German finance minister Wolfgang Schaüble has dismissed fears that the euro zone crisis might be starting up again amid political turmoil in Portugal and pressure on Greece, saying last night that the euro could withstand such issues in individual states.

“I think the euro is seen as so stable by financial markets that even political situations in individual countries, which always occur in democracies, don’t mean a crisis for the euro,” he said at a ceremony in Berlin marking a loan deal between the German and Spanish development banks.

Mr Schaüble said he regretted that his former Portuguese counterpart Vitor Gaspar had resigned but added: “I don’t think this will lead to a new euro crisis.” He expected to work well with his successor, he said.

Mr Gaspar, architect of the spending cuts and tax hikes required by Portugal’s lenders in exchange for a bailout, quit as finance minister on Monday, citing an erosion in support.

Portugal’s prime minister and his coalition partner are now trying to defuse a political crisis that has jolted Lisbon’s hope of a smooth exit from its international bail out and stoked fears a second rescue package might be necessary.

Turning to Greece, Mr Schaüble said he was “very confident” that the looming report on reform progress in the country by the so-called “troika” of international lenders, which is due to be presented to Eurozone finance ministers when they gather in Brussels on Monday, would be positive.

The Eurogroup meeting will determine whether to unlock a further €8.1 billion in aid for Greece.

The government of Antonis Samaras has made “considerable progress” with economic reforms, Schaeuble said, and this could be demonstrated with hard economic data from Greece.

Spanish economy minister Luis de Guindos said the €800 million credit from Germany for his country’s small and medium-sized companies, who have been starved of financing, was proof there was “confidence in the Spanish economy”.

Mr Schaüble brushed aside the suggestion that the German loan for Spanish firms, as well as its support for measures to fight endemic youth unemployment across southern Europe, meant German chancellor Angela Merkel had had a change of heart about how to tackle the euro zone crisis.

The chancellor’s insistence on spending cuts in return for aid during the euro crisis has made her a target of anger in recession-hit southern Europe.

“I don’t think what we are doing today has anything to do with the election in Germany,” Mr Schaüble said.