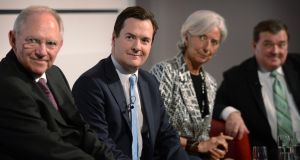 German finance minister Wolfgang Schäuble signalled support for an easing of Europe’s austerity drive as he prepared to face pressure from global counterparts to do more to spur growth.

Ahead of a meeting of Group of Seven finance ministers and central bankers in the UK, Mr Schäuble told a conference in London there’s “enough room to manoeuvre” for euro-area governments to respond to the currency bloc’s recession.

Such comments reflect the recent shift in stance from Europe’s powerhouse economy, which had previously hailed austerity as the main route to prosperity for the debt-strapped region.

The G7 officials start a two-day meeting in Aylesbury, north of London, today.

Speaking on the same panel as Mr Schäuble, International Monetary Fund managing director Christine Lagarde repeated that the global economy is in a “three-speed recovery,” in which emerging markets are leading the way, followed by healing economies such as the US, with laggards including Europe and Japan bringing up the rear.

“Things are better this year than they were last year, but we’re not out of the woods yet,” Canadian finance minister Jim Flaherty said. UK chancellor of the exchequer George Osborne said “the priority is now to nurture the recovery.”

Evidence has grown in recent weeks that Europe is willing to cool the ardour for austerity that marked its response to the three-year debt crisis.

France and Spain may be given two extra years to meet European Union deficit goals, while other nations, like the Netherlands, Poland and Slovenia, may get one additional year.

The new Italian government is pledging to unwind some of the budget-cutting projects undertaken by its predecessor, and Spain has outlined a plan to spur investment in companies.

Highlighting the euro zone’s economic weakness, unemployment reached 12.1 per cent in March, with a level of 26.7 per cent in Spain, according to the EU’s statistics agency.

Greece reported 27 per cent unemployment in February yesterday. “The end of the dogma of austerity” as the only tool to fight the debt turmoil is over, French finance minister Pierre Moscovici said.

Indicating he still sees value in the original approach, Mr Schäuble said budget deficits have been trimmed in many euro zone states and bond yields have fallen. He still sees a need for countries to improve the structures of their economies. “A crisis in confidence in the European economy is not solved, but a crisis of confidence has diminished,” he said.

Mr Flaherty said all governments needed to find “a balance” between ensuring fiscal order in the medium term and providing short-term support for growth. “This isn’t a single horse that one must ride, you can do both,” he said.

The UK government indicated no plans to slow its own fiscal consolidation program, which has drawn warnings from the IMF for potentially being too fast. “We need to go on cutting that deficit,”

Prime minister David Cameron said yesterday. “We’re not doing this at an irresponsible pace. We’re doing it at a sensible, measured pace, but it absolutely has to be done.”

One area that’s still subject to disagreement at the G7 is a proposed financial-transaction tax in at least 11 EU countries.

Mr Cameron called it a “mistake for Europe” and Mr Flaherty labelled it a “tax on the customers of banks.”

Mr Schäuble said there is a “long way to go” before a decision is made.

1 ‘No demand... because there are no people’ at well-known Dublin pub
2 Revised help-to-buy scheme opens for applications
3 Divorce: What will it cost and can you afford it?
4 Apple received $250bn dividend from Irish subsidiary in 2019
5 Transferring the family farm without a tax headache
6 Nearly 30,000 could lose pandemic payment if they do not confirm eligibility
7 Post-Covid television starts to shape up – but with missing pieces
8 ComReg criticised for ignoring request to update pricing models
9 Bank of Ireland does U-turn after refusal to reimburse ‘smishing’ victims
10 HSE says fix for Covid Tracker app rolled out to all Android users
Real news has value SUBSCRIBE