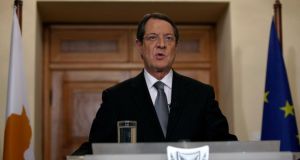 Cypriot president Nicos Anastasiades addresses the nation with a televised speech from the presidential palace in Nicosia in the wake of the bailout earlier this week. Photograph: Petros Karadjias/Reuters

Big depositors in Cyprus's largest bank stand to lose far more than initially feared under a European Union rescue package to save the island from bankruptcy, a source with direct knowledge of the terms said on Friday.

Under conditions expected to be announced on Saturday, depositors in Bank of Cyprus will get shares in the bank worth 37.5 percent of their deposits over €100,000, the source told Reuters. The remainder of their deposits after that may never be paid back.

The toughening of the terms will send a clear signal that the bailout means the end of Cyprus as a hub for offshore finance and could accelerate economic decline on the island and bring steeper job losses. Officials had previously spoken of a loss to big depositors of 30 to 40 per cent.

Earlier, the president of Cyprus said the risk of bankruptcy had been contained and the country had no intention of leaving the euro in a speech laden with criticism of Europe's currency union for “experimenting” with the island’s fate.

Conservative leader Nicos Anastasiades spoke a day after banks reopened following an almost two-week shutdown imposed as the country raced to clinch a rescue package from the European Union.

Officials enforced firm limits on transactions to avert a run on deposits by worried Cypriots and wealthy foreign investors. In the end the reopening of the banks was largely quiet on Thursday, with Cypriots queuing calmly for the €300 they were permitted to withdraw.

Mr Anastasiades said the restrictions on transactions – unprecedented in the euro zone since its coins and banknotes entered circulation in 2002 – would be gradually lifted. He gave no time frame.

Cyprus’s difficulties have sent jitters around the fragile single European currency zone, and the imposition of capital controls has led economists to warn that a second-class “Cyprus euro” could emerge, with funds trapped on the island less valuable than euros that can be freely spent abroad.

In a speech to civil servants in the capital, Nicosia, Mr Anastasiades hit out at banking authorities in Cyprus and Europe for pouring money into a crippled Cypriot bank that now faces closure under the €10 billion bailout plan that averted the immediate risk of financial meltdown.

“How serious were those authorities that permitted the financing of a bankrupt bank to the highest possible amount?” Mr Anastasiades said.

“I don't want to say more,” he added. “Now is not the time to say who bears more or less of the blame.”

Mr Anastasiades clinched the last-ditch bailout in Brussels five days ago, but has faced a backlash from Cypriots angry at the price that came with it – the winding down of the island’s second-largest bank, Cyprus Popular Bank or Laiki, and an unprecedented raid on deposits over €100,000 that could spell the end of Cyprus as a hub for offshore finance.

The country faces steep job losses and a prolonged and deep recession.

The president, barely a month in the job and wrestling with Cyprus’s worst crisis since a 1974 war split the island in two, accused the 17-nation euro currency bloc of making “unprecedented demands that forced Cyprus to become an experiment”.

But he added: “We have no intention of leaving the euro. In no way will we experiment with the future of our country.”

European leaders have insisted the raid on big bank deposits in Cyprus is a one-off in their handling of a debt crisis that refuses to be contained.

But policymakers are divided, and the waters were muddied a day after the deal was inked when the Dutch chair of the euro zone’s finance ministers, Jeroen Dijsselbloem, said it could serve as a model for future crises.

Faced with a market backlash, Mr Dijsselbloem rowed back. But yesterday, European Central Bank Governing Council member Klaas Knot, a fellow Dutchman, said there was “little wrong” with his assessment.

“The content of his remarks comes down to an approach which has been on the table for a longer time in Europe,” Mr Knot was quoted as saying by Dutch daily Het Financieele Dagblad . “This approach will be part of the European liquidation policy,” he said, in comments a spokesman said were accurately reported.

Yesterday, easing a ban on cheque payments, Cypriot authorities said cheques could be used to make payments to government agencies up to a limit of €5,000. Anything more than €5,000 would require Central Bank approval.

The bank also issued a directive limiting the cash that can be taken to areas of the island beyond the “control of the Cypriot authorities” – a reference to Turkish-controlled northern Cyprus which considers itself an independent state.