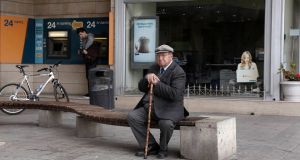 An elderly man sits in front of a closed branch of Bank of Cyprus as a youth makes a transaction at an ATM in Nicosia today. Labour MEP Nessa Childers described as a “terrible mistake” a bailout deal which includes small Cypriot depositors. Photograph: Yorgos Karahalis/Reuters.

She described as a “terrible mistake” the €10bn deal which includes small Cypriot depositors with less than € 100,000 in the levy on bank accounts.

Ms Childers has written to Europe an Commission President Jose Manuel Barroso asking for Mr Rehn’s resignation over the “fiasco”.

“It is simply unfair, undemocratic and could even lead to a bank run in other parts of Europe,” she said in a statement today.

The decision to impose losses on small depositors “crossed an extremely important red line in the crisis” and “must be reversed immediately”, she said.

Ms Childers says while the ECB, IMF, Cyprian government and all finance ministers involved share the blame, the blunder by Mr Rehn come after “years of failed austerity policy” presided over by him.

There was a lack of “social responsibility for those most in need of protection” underpinning the ideology of the Troika’s approach to Cyprus and other programme countries, she said.

She called for more accountability and transparency around Troika decisions including a European Parliament veto over the appointment of leaders, reports to the parliamentary committee and the right to audit Troika actions.

Meanwhile Fianna Fail called on Taoiuseach Enda Kenny to “spell out” what contacts he had with other leaders and the ECB on the Cypris crisis.

Fianna Fáil TD and finance spokesman Michael McGrath asked what was the basis for assurances that deposit raids planned for Cyprus would not be imposed in Ireland if more capital was needed for the banks.

Mr Kenny “ needs to move quickly to spell out exactly what he has done to back up the headlines telling us that there is no problem. Public confidence requires it,” he said in a statement.

Cypriot bank depositors appear to have won some concessions on the terms of the deal. A revised draft bill seen by Reuters would exempt savings under €20,000 from the planned 6.75 per cent levy on deposits under €100,000.

However Cyprus's government expects parliament to reject the measure, needed to secure a bailout and avoid default and banking collapse.

There was also negative reaction from Irish exporters who today warned that a badly handled Cyprus bailout could severely damage the Irish and other euro zone economies.

It “could push the recession deeper and will make life very difficult for Irish exporters who rely on the EU markets for 59 per cent of Ireland’s manufactured goods,” chief executive of the Irish Exporters Association John Whelan said.

It was the “most negative news” in some time and comes at a “very bad time” for Irish exporters due to the impact of the horse meat scandal, Mr Whelan said.

The package could spread crises to other countries, destabilise the euro and threaten the euro zone, he said.

Separately People Before Profit TD Richard Boyd Barrett said it would be good for Ireland if the Cyprians reject the proposed levy on small depositors.

The people of Cyprus had already shown the effectiveness of protesting because it had forced their government to start renegotiating the small depositor plan, he said.

“By taking to the streets and expressing their outrage, the people of Cyprus have achieved more in a few days than Enda Kenny and Eamon Gilmore have achieved in two years, in terms of forcing the Troika to re-negotiate,”he said.

If Cyprus rejected the deal or defaulted it would raise the possibility of “bankers and bondholders taking responsibility for the crisis they had created, rather than again imposing the cost of the crisis onto the backs of ordinary European citizens,” he said.

1 PTSB plays down Ulster Bank talk as it sells €1.4bn of loans
2 Am I crazy to consider switching to an Ulster Bank mortgage?
3 Up or down – how much is your Local Property Tax this year?
4 Irish tech company Asavie acquired by Nasdaq-listed Akamai
5 How much state pension will I get next year?
6 Disposable income in Ireland rose 28% between 2012 and 2019
7 First Derivatives expects Covid-19 to accelerate growth
8 How long can Government afford to keep State pension age at 66?
9 CRH sells Brazilian cement business for $218m
10 Brexit to curb services trade with UK, accountants group warns
Real news has value SUBSCRIBE