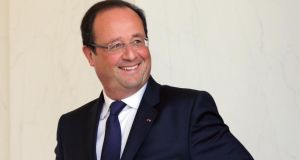 The French government foresees another €18 billion in budgetary adjustments next year, with 80 per cent of this to come from spending cuts and the remainder from new taxes. This follows a comparable adjustment of €30 billion in 2013, the bulk of which was delivered through taxation.

The 2014 French budget, which was presented in cabinet yesterday, pencils in an €82 billion budget deficit next year, which was higher than the €68.7 billion signalled by budget minister Bernard Cazeneuve in June. The €82 billion includes €12 billion for a “plan for future investment” that will not be included in the EU’s calculation of France’s budget deficit.

France is taking full advantage of the postponement until 2015 accorded by Brussels to reach the target of 3 per cent of GDP in deficit spending. The deficit represented 4.1 per cent of French GDP this year, and will fall to 3.6 per cent next year. The government says the economy will grow by 0.9 per cent next year.

Savings next year will come, the government says, from cutting €6 billion in social spending. It plans to save €300 million on unemployment insurance, although negotiations on reforming the system have not yet started. It also intends to reduce subsidies to local governments and semi-public organisations, including museums and the scientific research centre CNRS, by €3.3 billion.

The state has hired an additional 3,347 civil servants since French president François Hollande came to office. A similar number of posts will have been cut in 2013 and 2014, but it is not clear where €1.7 billion in promised reductions in government salaries will be achieved.

Next year’s budget was announced against a background of grumbling over tax increases. On August 30th, Mr Hollande promised a “fiscal pause” next year. But the prime minister, Jean-Marc Ayrault, corrected him on September 18th, saying the pause would not be possible until 2015.