Germany is flatlining and the coronavirus crisis is biting 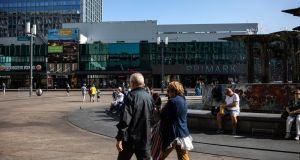 Berlin, Germany. The German economy has been hit by falling household and government consumption, while capital investment in machinery and equipment has fallen. Photograph: Lena Mucha/NYT

The euro-zone’s economy is growing at the slowest rate since the bloc’s debt crisis seven years ago, according to data published on Friday, dealing a blow to expectations that the outlook had begun to brighten.

The single currency zone grew at a quarterly rate of 0.1 per cent in the fourth quarter, its slowest rate of expansion since early 2013. The flash estimate was in line with consensus expectations. The job market, however, continued to improve as the number of people in work increased 0.3 per cent in the final three months of 2019.

Germany flatlined in the fourth quarter, producing zero growth, a performance that was below analysts’ expectations and down from an upwardly revised 0.2 per cent in the third quarter, according to separate figures released on Friday.

The figures came on the heels of gloomy indicators that have largely dissipated the optimistic mood with which the single currency bloc began the year. Unexpectedly weak December industrial production figures published earlier this week showed the biggest monthly fall in almost four years.

That followed a 1.6 per cent drop in euro-zone retail sales in December, the steepest monthly fall for a decade.

“At the beginning of the year we saw surveys pointing to a recovery in manufacturing and the resilience of services in the euro zone,” said Nadia Gharbi, senior economist at Pictet Wealth Management. “But the hard data we have seen recently has been pretty horrible.”

A number of economists had feared that the sharp drop in industrial output and consumer spending could drag German and euro-zone growth below zero.

The German economy was hit by falling household and government consumption, while capital investment in machinery and equipment fell. German exports dipped as imports rose, but the declines were partly offset by growth in construction and other capital investment.

“The numbers so far have been just awful, not only industrial production but also retail sales,” said Anatoli Annenkov, senior European economist at Société Générale.

However, he was still betting on a rebound early this year. “I don’t necessarily see [the fourth-quarter figures] as the start of a recession in Germany, as the outlook for the first quarter was improving and it will take significant supply line disruptions to have an impact,” he said.

Some degree of additional economic disruption could come from the coronavirus outbreak in China, which is expected to affect manufacturing supply chains, exports and travel. Exports of goods to China account for 7 per cent of all German exports, making up 2.8 per cent of national output in 2018, according to the IMF.

“The outbreak of the coronavirus provides a substantial risk for the expected global recovery, as hopes were pinned on an improvement of the Chinese economy,” said Stefan Schneider, chief economist for Germany at Deutsche Bank.

“This is particularly true for Germany, where weak Chinese demand was an important driver behind the export deceleration in 2019,” he said, adding that Deutsche estimated the coronavirus outbreak would knock 0.2 percentage points off first-quarter growth, “making a technical recession quite probable”.

Investors were relatively unperturbed by the weak data, sending the Stoxx 600 index of the region’s big companies to a record high on Friday. Bond markets also rallied, pushing yields on Greek 10-year bonds to an all-time low below 1 per cent.

Economists said this market surge was fuelled by a belief among investors that if the economy fell into a rut, central banks would step in to ease monetary policy.

The European Central Bank’s next monetary policy meeting is on March 12th when it is due to revise its forecasts for growth and inflation.

“It will be an opportunity for the ECB to make a dovish tilt in its March meeting by saying the virus increases the downside risk for the economy,” said Ms Gharbi at Pictet.

ABN Amro forecasts the ECB will cut rates from minus 0.5 per cent to minus 0.6 per cent and increase the size of its bond-buying programme from €20 billion to €40 billion a month.

But based on interest rate swap prices, most investors still expect the ECB to keep rates unchanged this year. Goldman Sachs said in a research note this week that a rate cut was unlikely “but we do not discount the possibility that the bank would respond with monetary easing should the coronavirus affect business sentiment and financial conditions”.

Oliver Rakau, lead euro zone economist at Oxford Economics, said: “There is rising speculation that the ECB will act in March, but we think there is quite a big hurdle for the ECB to cut rates further.”

Philip Lane, the ECB’s chief economist, said this week that he was monitoring the impact of the coronavirus, which could provide a “pretty significant short-term hit on the economy”. But he added that this was typically followed by a “significant bounceback” once the crisis passed.

Despite all the gloomy news, economists say there are some reasons for optimism. Mr Rakau said the disappointing industrial production figures could be partly explained by a quirk of the calendar: there were an unusually high number of “bridge days” between weekends and bank holidays, such as Christmas and New Year’s Day, at the end of last year when companies often close.

A sharp drop in oil prices and a slide in the value of the euro against the US dollar since the start of the year are both expected to help boost euro-zone activity. Mr Annenkov at SocGen said another positive sign was a fall in inventories as a proportion of industrial orders to a 12-month low.

Yet Europe’s open economy relied heavily on exports for growth so any widespread disruption from the coronavirus could significantly weigh on economic activity this year, economists warned.

“This virus is another one of the negative shocks that has the potential to derail the whole story,” said Mr Annenkov. “But we are not prepared to write off the possibility of a recovery in the first or second quarters just yet.” – Copyright The Financial Times Limited 2020