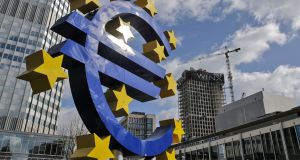 Euro area output rose to the highest level in almost six years in February as growth in the region’s top four economies accelerated.

A composite Purchasing Managers’ Index climbed to 56.0 from 54.4 in January, putting the currency bloc on track for quarterly growth of 0.6 per cent, IHS Markit said on Friday. The reading is in line with economist forecasts and a previous flash estimate.

Output was led by manufacturing, according to the London-based company. A gauge for services activity also strengthened. “The final PMI numbers paint a bright picture of a euro-zone economy starting to fire on all cylinders,” said Chris Williamson, chief business economist at IHS Markit.

The European Central Bank has decided to continue buying assets until at least the end of 2017, supporting the region’s firming recovery amid political risks. While inflation -- currently at 2 per cent - and a slew of economic indicators have signaled the economy might be more robust than projected, ECB president Mario Draghi has pointed to underlying weakness as evidence that stimulus is still necessary.

The Governing Council will convene in Frankfurt on March 8th-9th. Companies across the region passed on higher input costs to customers, raising selling prices at the fastest rate in five and a half years, IHS Markit said. “The acceleration in growth, employment and prices signaled by the surveys suggests that analysts will begin to pull forward their expectations of when the ECB could begin tapering its stimulus,” Mr Williamson said.

“However, it seems likely that central-bank rhetoric will remain dovish in coming months, focusing on the headwinds that the economy faces in 2017, and specifically the need for policy to remain accommodative in the face of political uncertainty.”