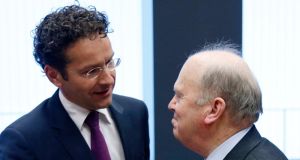 Euro area finance ministers debated whether to pay Greece’s next €8.1 billion bailout tranche at once or in instalments – to ensure reform commitments are met – at a meeting in Brussels yesterday.

Ahead of the talks, Greek officials agreed with its international backers on a plan to fire 4,000 and redeploy 25,000 public sector workers by year-end which, if approved, would remove one of the biggest roadblocks to the latest payout.

Dutch finance minister Jeroen Dijsselbloem, chairing yesterday’s meeting, said payments may be broken up if creditors deemed it “necessary” and “helpful”. “This morning we reached an agreement within the troika. [Now] we are going to judge their progress.”

The report by the troika of Greek creditors – European Central Bank, European Commission and International Monetary Fund – acknowledged “important progress continues to be made” but warned that “policy implementation is behind in some areas”.

As well as public sector job cuts, dubbed “mandatory exits”, items on the to-do list include “concrete steps” to control over-spending in health, reform of income and property tax. Athens has also fallen behind in the sale of state assets, with no bids received last month for national gas providers. Several euro zone finance ministers, led by Germany’s Wolfgang Schäuble, have backed an instalment plan for Greece to prevent further slippage in its €240 billion programme.

“I’m confident that we can take another step forward today,” said Mr Schäuble ahead of the meeting. “It will remain a difficult path for Greece.”

Luxembourg’s finance minister Luc Frieden said “Greece will get its money if we get proof that Greece is living up to everything [promised]”.

The latest troika assessment came amid the departure of one of three coalition partners from the government over the sudden closure of state broadcaster ERT, leaving the government with a tight majority of 155 in the 300-seat parliament.

Also on the agenda was the ongoing tension in Portugal, triggered by last week’s resignation of finance minister Vitor Gaspar. Finance ministers are under orders to avoid anything to cause another euro flare-up in the bloc’s crisis countries.