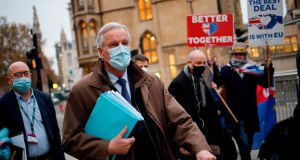 EU chief negotiator Michel Barnier warned that unless a breakthrough was made by Friday the EU may run out of time to ratify a deal. Photograph: Tolga Akmen / AFP

There must be a breakthrough in talks by Friday or there may be no way to avoid massive trade disruption on January 1st, the European Union has told Britain.

It comes amid a warning from EU capitals that a deal must not give too much away. The two sides are locked in intense talks in London to try to avoid a sudden imposition of tariffs on trade that would devastate Irish exporters in just a few weeks time.

With mounting pressure from businesses and governments to know what they must plan for at the end of the month, chief EU negotiator Michel Barnier warned his British counterpart David Frost that unless a breakthrough was made by Friday the EU may run out of time to ratify a deal.

Any agreement must be passed in the European Parliament, and a failure to allow enough time would mean the “massive disruption” of no deal terms for as long as it took for the deal to be ratified, a source close to the talks said.

“The point Barnier was making to Frost was if we don’t have a deal or at least something over the next day or so, we can’t guarantee there will be a deal by January 1st,” a source close to the talks said. “Even if we get a deal in 10 days time, if we run down the clock too much, there is a very real risk that the deal can’t be ratified in time. We need to put an end to this somehow.

“If there is no ratified deal in place on January 1st, there will be massive disruption.”

It came amid increasing tensions between member states and the EU negotiating team, with a group of countries led by France warning that they preferred a no-deal outcome to an accord that gave too much away.

‘Not at any price’

Paris and the Hague have expressed concern Mr Barnier is at risk of going beyond what they can accept in an attempt to reach a deal, while the negotiator has suggested he needs more flexibility to win Britain over, according to diplomatic and official sources.

“Obviously an agreement would be good to have but not at any price,” an EU diplomat said.

Talks remain stuck on fisheries, with each side only willing to cede 20 per cent of current stocks to the other, according to a source briefed on the talks and Britain insisting access should be decided in annual negotiations. A proposal to review the agreement, including fish quotas, in five or 10 years time has been discussed as a possible way to allow the EU to accept a tough compromise in the medium term.

A point of concern for EU observers is a lack of clarity on how future disputes could be resolved, such as if Britain broke commitments on common standards, with faith undermined by Downing Street’s attempts to override parts of the withdrawal agreement through domestic legislation.

Bernd Lange, a German MEP who chairs the European Parliament’s trade committee and was briefed by Mr Barnier on Wednesday as a member of its UK coordination group, said that he was less optimistic a deal could be reached than at the start of the week, and that with the facts he had at hand a no deal seemed the better outcome.

“To be open and frank, I’m really upset about the procedure. There is no possibility for the European Parliament, member states as well, to have a proper scrutiny of the agreement. This is really really going from tragedy to farce and this is really quite unique in the history of trade agreements in the European Union,” Mr Lange said. “This really the end game, and that’s also clear for the British side.”

9 Who are Ireland’s 17 billionaires?