It is expected that EU commission will not appeal court ruling 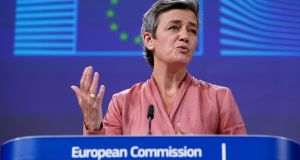 European Union competition commissioner Margrethe Vestager signalled on Friday that Brussels will wait until close to the last minute next week before deciding whether to appeal a July court decision that quashed her finding four years ago that Apple received €13.1 billon of illegal state aid from the Republic.

Still, it is widely expected by legal observers that the commission will not appeal the ruling by the General Court in Luxemburg, given how emphatically the court shot down the arguments of Ms Vestager’s team.

If the commission does not lodge an appeal by Friday, September 25th, the Government will move quickly to start returning the money, which totalled €14.3 billion when interest was included and has been sitting in escrow since 2018, to Apple. The escrow funds are mainly held by way of bonds, rather than cash.

“We haven’t taken that decision yet,” Ms Vestager told reporters on Friday in Brussels. “As the commission always do, we wait until we are closer to the deadline of the appeal question, and then of course I’ll be happy to come back to that.”

Ms Vestager, who has also been in charge of the EU’s digital policy since last year, made the remarks as she unveiled a package of proposals to increase investment in supercomputing, high-speed broadband and 5G.

The General Court ruled in July that the commission, which began looking into Apple’s Irish tax affairs in 2013, “did not succeed in showing the requisite legal standard that there was an advantage” that flew in the face of EU law when it decided in August 2016 that Apple had received tax aid from Revenue in the Republic.

The commission’s case was mainly two-fold and centred on two tax opinions – or “rulings” as they are referred to – handed out by Revenue, in 1991 and 2007, the year the first iPhone was unveiled and Apple’s profits started to soar.

The primary argument was that the rulings allowed Apple to push most of its European sales through employee-less “head office” parts of two Irish-registered units, which were non-resident for tax purposes. Only the activities of Irish “branches” within the same units were subject to tax in the State.

The commission’s view was that valuable intellectual property (IP) behind Apple products lay inside the Irish branches, meaning that most of the profits were taxable by Revenue in Dublin. Apple argued it was held outside the branches – and ultimately controlled from group headquarters, in California.

The General Court ruled that the commission did not succeed in showing that the valuable IP should have been allocated to the Irish branches.

The second strand to the commission’s case was that even if the Irish branches did not hold the IP, Revenue officials did not apply a proper arm’s-length principle of transfer pricing when it came to working out what profits could be taxed in the Republic.

While the court said that there were “insistencies” and “defects” with Revenue’s approach, it concluded that the commission failed to show the outcome was flawed – and that Apple paid less tax in Ireland than it should have.