Chris Johns: Time to permit Britain leave EU without deal it clearly does not want anyway 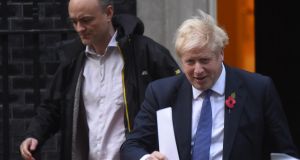 British political adviser Dominic Cummings and prime minister Boris Johnson: Britain is Britain with all of its strengths and weaknesses. Johnson-Cummings have played to those weaknesses. Photograph: Peter Summers/Getty 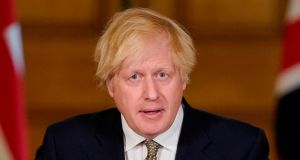 ‘Caving into Johnson’s demands is a non-starter: the single market is worth protecting.’ Photograph: Andrew Parsons/10 Downing Street/AFP via Getty Images)

Anyone who is surprised by the latest turn of events in Brexit Britain hasn’t been paying attention. Modelled in part on the Bannon-Trump experiment in the US, the Cummings-Johnson administration came to power on the strength of a single issue – exiting the EU – and a willingness to flout convention, tell lies, break laws, tear down institutions and upset the neighbours.

There has been a significant constituency in the UK for the hardest of EU exits for years. Initially it was just Nigel Farage and his acolytes. Today it is the Tory party, purged of centrists, sulking Remainers and anyone with less than absolute fealty to the leader.

There are unanswered questions about the decision to break international law, to shred a Withdrawal Agreement whose ink has barely had time to dry. Why now? What are the tactics, the objectives, that led Boris Johnson to repudiate the deal that he negotiated and signed?

Johnson wrote on Saturday that it was a step necessary to preserve the integrity of the UK, supposedly from a future attack from the EU. This is language normally heard from western leaders when talking about countries like Russia or North Korea. That Britain is now referring to the EU – “our friends”, Johnson once said in a previous version of himself – in terms of outright aggression speaks volumes.

So what are they up to? We know about Dominic Cummings’ appetite to “break things”, a pseudo-anarchist philosophy that is usually found in children’s playgrounds and students’ unions. Commentators puzzle over Johnson the mayor of London and Johnson the prime minister. The former displayed liberalism, cosmopolitanism and a breezy middle-of-the road attitude, albeit with the odd expensive gimmick. Johnson seemed the antithesis of the ideologue – he rarely displayed much belief in anything other than himself. The exhausted-looking demagogue on display in Downing Street could not stand in greater contrast.

If they really were worried about a future attack from the EU, they presumably would never had signed the agreement, with all of its supposed threatening potential, in the first place. The idea that they didn’t read or understand it doesn’t stand scrutiny. The leaked civil service briefings about the treaty’s full implications, given to Johnson before he signed, reveal that he knew what he was doing.

One might think if the EU ever did decide to attack, that might be the moment to repudiate the treaty. We might also wonder about a mindset that believes the EU would ever act in this way.

Perhaps it really is just an ill-advised negotiating tactic. That’s what Johnson wants us to believe. It might just be a re-run of the original Withdrawal Agreement negotiation where threats and hardball tactics were a prelude to a climbdown by Johnson, while at the same time declaring victory.

Bluff and bluster can fool voters, win a referendum and a general election, but cannot defeat the reality that Britain will be damaged by leaving the EU. No matter how hard you try. A lot of the flailing around is the result of fantasy finally being confronted by reality.

Britain is treated daily to world beatings. Dominic Raab once described Britain’s foreign aid programme as world-beating. Johnson praises (but doesn’t pay) the National Health Service in exactly the same terms. A world-beating test-and-trace app never made it out of the Isle of Wight. The current world-beating test-and-trace system is in tatters, with applicants being told that the nearest test centre is hundreds of miles away. We now have a moon shot: a mass testing system that will cost £100 billion (€108 billion).

Method or madness? Another reason for breaking international law is, apparently, the fear that EU state aid rules will thwart Cummings’ ambition to build a trillion-dollar tech company. Anyone who has ever tried to build a business of any kind will wish him luck. Because anyone with an ounce of self-awareness knows how much chance and circumstance is involved in building businesses, successful or otherwise.

The internet was an accident, one that grew out of a 1960s US decision to build a distributed array of computing power that could withstand a nuclear attack. Each of Silicon Valley’s tech giants has idiosyncratic – sometimes weird – histories. Each of which reveals how much serendipity plays a big part in success. Bill Gates’ purchase of MS-DOS in 1981. Apple’s move into consumer products away from computers. How Amazon grew out of an online book seller into a cloud computing giant and destroyer of the high street. Anyone remember Netscape or Alta Vista? Anyone remember Nokia? British Leyland? The idea that the UK government can pick and grow winning companies flies in the face of Britain’s experience each time it has tried to do exactly that.

Britain is still Britain with all of its strengths and weaknesses. Brexit and Johnson-Cummings have just played to those weaknesses. My advice to the EU is to now let things play out. Caving into Johnson’s demands is a non-starter: the single market is worth protecting and Hungarian prime minister Viktor Orban is watching carefully to see how much backbone the EU has.

Therapists often warn about getting sucked into other people’s psychodramas. Let this one play out, let them leave without the deal that, if truth be told, they don’t really want. It won’t be the end of the story by any means. This one will run and run.