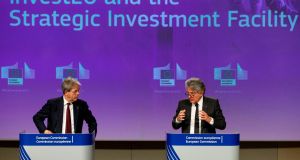 The European Commission has proposed pumping billions of euro into companies to help them survive the coronavirus pandemic.

The EU’s executive body laid out a range of tools on Friday that would help unlock investment and loans, to counter the risk of a lack of liquidity worsening a downturn expected to be the worst in a century.

“Investment was the first victim of the fiscal consolidation that accompanied the sovereign debt crisis a decade ago. Such was the drop in investment needs in Europe following that crisis that they had barely reached pre-crisis level a decade later,” economy commissioner Paolo Gentiloni said as the plans were unveiled.

Covid-19 risks provoking a “further terrible blow” to investment in Europe, he said.

The commissioner unveiled a €15 billion plan to invest in companies with additional guarantees to attract extra funding from private investors, to try to free up the €720 billion it calculates that EU companies will need this year to avoid facing insolvency.

The commission also laid out proposals for a €26 billion “solvency support instrument” to support otherwise healthy companies that have been hit by cashflow problems as a result of the pandemic. An additional €15.3 billion fund would invest in smaller firms and companies active in infrastructure, research and social issues.

The proposals come amid concern in the EU about the downturn raising the risk of hostile takeovers and the loss of crucial companies to other geopolitical actors. Investment would be focused on areas of strategic interest such as healthcare, space, defence, digital and green technologies.

The ideas are part of the EU’s plan to alleviate the impact of the coronavirus pandemic in Europe. This week, it announced plans to make €750 billion in grants and loans available to member states to counter the economic damage of the disease, funded by borrowing on financial markets.

The proposals must win the unanimous approval by member states in order to come into force. The commission has emphasised that unlike during the euro zone crisis of the last decade, national spending policies are not to blame for the current downturn, and it has urged governments to be prepared to spend to counter its effects.

“We must also avoid short-sighted fiscal policies that would see public investment fall victim once again to spending cuts that would only further undermine our potential to grow and create jobs,” Gentiloni said.