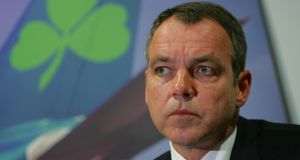 Aer Lingus CEO Christoph Mueller has been appointed the chairman of An Post.

Aer Lingus chief executive Christoph Mueller has been appointed the new chairman of An Post.

Announcing the decision this afternoon, Minister for Communications Pat Rabbitte said the appointment comes at a critical time for the future of An Post.

“An Post has a great brand and an important nation-wide network. It provides very important services to communities throughout Ireland. However, in the internet era, the company also faces significant challenges.”

He said the company would benefit from the strategic leadership approach that Christoph Mueller has brought to Aer Lingus.

Mr Mueller previously held leadership roles in Deutsche Post and DHL before joining Aer Lingus. He was also appointed to the Board of Tourism Ireland in January last year.

An Post has a turnover of approximately €800 million and employs 9,000 people.

1 Revenue publishes list of companies tapping State for wage support
2 How long can Government afford to keep State pension age at 66?
3 Grocery shopping app Buymie delivering for Devan Hughes
4 Developers may need to go back to the drawing board as one-beds fall from favour
5 Cosgrave Property Group secures exit from Nama
6 Trump vs Biden: Stakes are high for the Irish economy
7 Halfords sees 700% increase in sales of e-scooters
8 Bake-off soy sauce tweet backfires for UK trade ministry
9 Covid-19 will have a significantly worse impact on UK public finances than on ours
10 Tighter regulations for car makers will drive buyers to choose electric
Real news has value SUBSCRIBE