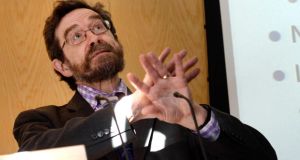 An acceleration in employment growth is likely to see the creation of about 50,000 new jobs this year, the Economic and Social Research Institute (ESRI) has said.

In its spring quarterly economic commentary, the institute estimated employment growth would accelerate by 2.7 per cent this year, its highest level since 2007, on the back of continued growth in exports and an uptick in domestic demand, associated in part with strong investment in the non-residential construction sector.

According to the ESRI’s David Duffy, this would create about 50,000 new jobs, bringing employment back to 2008 levels. On that basis, the institute forecast the country’s unemployment rate would drop from its 2012-peak of 15.1 per cent to 11.4 per cent this year, and to 10.1 per cent next year.

“The continuing improvement in the current account of the balance of payments and the rapid growth in employment point to the continuation of the recovery into 2014 and 2015,” it said.

“There are signs of growth in private investment and, as this trend develops, it will contribute to further growth in output and employment.”

The institute predicted gross national product (GNP) would grow by 3.5 per cent this year, its fastest rate of growth in seven years, and by 3.7 per cent next year. This represents an upgrade on the forecasts of 2 per cent and 2.7 per cent it made as recently as December.

The ESRI forecast gross domestic product (GDP), the more standard measure of output, would grow by 2.6 per cent this year, and by 3.5 per cent next year.

It warned, however, that the GDP numbers were being distorted by the so-called “patent cliff” in the pharmaceutical sector, and therefore gave an unreliable picture of activity in the economy.

Based on its forecasts, it said Government borrowing in 2015 was likely to come in below the troika-agreed target of 3 per cent, giving Minister for Finance Michael Noonan “limited” room to tax cuts.

While it expected, the international economy to be more favourable to Ireland in 2014 and 2015, particularly with real GDP growing in the country’s main trading partners -– the UK, the US and the euro area -– there was always the possibility of an unforeseen shock, and on that basis, it advocatedvised caution.

A study on savings behaviour found older age groups had shown a reduced tendency to save since 2010.

In contrast, those aged 21-35 have manifested a greater proclivity to save because they were less burdened with debt in the wake of the property market collapse.

1 Flight attendent seeks High Court injunction against Aer Lingus
2 Coronavirus: Irish holding back on holiday plans
3 Bank leaked my loan request to family who tried to rip me off
4 Wealthy investors’ legal challenge against Revenue fails
5 Tax burden on Irish households among lowest in EU
6 Solar panels: Are they worth the investment?
7 Coronavirus: ‘All bets are off’, says aircraft industry chief
8 Turbocharging housing supply may fuel negative equity
9 When the Chemistry no longer works – the closing of a leading Irish ad agency
10 Johnnie Fox’s sees ‘a few cancellations’ over coronavirus fears
Real news has value SUBSCRIBE