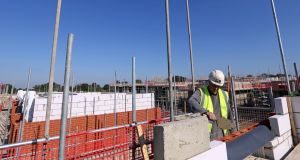 With housing a huge election issue and both major parties promising 200,000 new homes over the next five years, Eoin Burke-Kennedy asks what’s wrong with these numbers?

The domestic economy will grow by 3.6 per cent this year but challenges including Brexit, corporate tax reform, and housing will remain a threat, according to a report by Goodbody.

With housing a huge election issue and both major parties promising 200,000 new homes over the next five years, Eoin Burke-Kennedy asks what’s wrong with these numbers? Just about everything it seems.

New figures show first time buyers drove increases in the volume and value of mortgage drawdowns during the final quarter of last year, reports Colin Gleeson. It follows an earlier report from the Central Bank yesterday showing the number of mortgages in arrears under 90 days fell in the third quarter of 2019, but long-term arrears fell only marginally.

Portugal plans to end tax exemptions for some foreign residents and overhaul its “golden visa” scheme in changes that are likely to diminish the country’s appeal to wealthy international pensioners and big-earning celebrities.

Apple reported sales and profits for the holiday shopping quarter above Wall Street expectations, powered by a rise in iPhone sales for the first time in a year and soaring demand for add-ons like AirPods.

Greencore chief executive Patrick Coveney has said the Irish food giant will gradually begin to increase the percentage of British nationals in its workforce with the UK expected to leave the European Union in the coming days.

Eir chief executive Carolan Lennon said the company is “very happy” to use Huawei equipment for its new 5G network in the Republic, despite US claims that the Chinese company poses a security risk.

The commercial property boom in Dublin contributed to pretax profits more than doubling at the Irish arm of property company CBRE to €4.1 million in 2018.

In our coverage of the commercial property market, Ronald Quinlan reports that Dutch property investment firm Orange Capital Partners (OCP) has ramped up its investmentin Dublin’s private rented sector to the tune of €75 million. He also has news on the sale of a prime site on O’Connell Street in Dublin’s city centre.