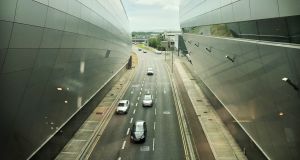 Dublin Airport contributes nearly €10 billion to the Irish economy and supports 130,000 jobs, according to a new study commissioned by its operator, DAA. Photograph : Bryan O Brien

Dublin Airport contributes nearly €10 billion to the Irish economy and supports 130,000 jobs, according to a new study.

The research, undertaken by economic consultants InterVistas, was commissioned by the airport’s operator, State-owned DAA, to assess the airport’s overall economic impact.

It found that Dublin Airport’s gross added value to the economy is €9.8 billion, which equates to 3 per cent of national income.

The study also suggests that the 57 per cent growth in passenger numbers from 20 million to 31.5 million between 2013 and 2018 supported the creation of 12,400 jobs during that period.

A total of 129,700 jobs are generated and facilitated by Dublin Airport, the report said, including about 21,500 directly related to the airport’s operation in areas such as security, operations, ground handling, immigration, customs and air traffic control.

The report used a combination of direct data from businesses based in and around the airport campus and an indirect economic multiplier to derive its findings.

It noted that growth in connectivity has played a key role in Dublin Airport’s larger economic impact. Connectivity increased by 59 per cent in the five years to the end of 2018, making it the second-fastest growing major airport in Europe in terms of connectivity behind Moscow’s Sheremetyevo International Airport.

The economic impact study also includes contributions from companies such as Amazon, Intel, Kingspan and Kerry Group, outlining how important the airport is to their respective businesses.

Insulation maker Kingspan said that travel flexibility is so crucial to its business that it now “leases an office at Dublin Airport for the convenience of our global staff”. Intel said “Dublin Airport is essential to our business operations in Ireland, ” while Kerry Group noted that “continued investment in Dublin Airport benefits Ireland’s export industry”.

The report cites a separate study of 625 businesses in five countries by trade association IATA, which found that 25 per cent of sales of the companies in question were dependent on good air transport links .

ESB called out for ‘contributing to human rights violations’ 05:10
Big tech ‘procedural queries’ delay decision on first data fines – watchdog 05:00
Which big tech firms are being investigated by the data regulator? 05:00
Catholic Church records may be inspected over GDPR concerns 05:00
Zipp Mobility has eyes on getting UCD students moving around campus 05:00