Devil’s in the detail at the Department of Finance 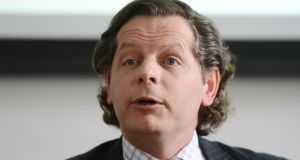 John Moran: “Do we really have the right structures as a State to encourage wide-ranging, cross-disciplinary debate about future spending priorities or infrastructural needs or the structures of our economy?”

The chaotic denouement of the Greek drama is salutary. The debacle calls to mind the worst moments of the Irish crash, when nobody seemed to be in charge as the public finances and the banking system went off the rails. Scary.

For all the sins of Ireland’s banking classes, it’s clear the State played its own monumental role in the collapse. But recovery demonstrates the State still had the capacity to execute a turnaround plan, albeit with external aid, intrusive oversight, harsh conditions and penal costs for taxpayers. Whatever about the high and low politics of the Greek wrangle, it seems the public apparatus in Dublin responded better to disaster than in Athens.

1 World health body raises coronavirus risk alert to ‘very high’
2 Coronavirus: Everything you need to know about Covid-19
3 Shane Ross: ‘I lost a friendship with Mattie McGrath completely. He got totally personal’
4 Areas advised to ‘stop everything’ as Storm Jorge hits Ireland
5 Murder in a crowded house: The full story of the Patricia O’Connor trial
6 10 things I’ve learned in 12 years living in Spain
7 Coronavirus outbreak: WHO raises risk warning to ‘very high’
8 Coronavirus: Aer Lingus cabin crew in self-isolation after passenger’s positive test
9 Britain is uncomfortable because Ireland has the upper hand for the first time
10 Man (21) jailed for inflicting ‘catastrophic’ injuries on baby girl
11 ‘We had spies there . . . I envy them.’ How the political world saw Sinn Féin’s meetings
12 My London house contents won’t fit into my Dublin home
13 Two Irish-born children lose appeals over asylum and protection process
14 ‘F**king n***er.’ A racist incident on Bachelors Walk
15 Coronavirus: Myths that have gained traction
16 Ross O’Carroll-Kelly: ‘I’m like, Who’s Samuel Beckett?’
17 Getting behind the rotten core of rugby with Dan Tuohy
18 Coronavirus: Communist Party mask has slipped as Chinese endure lockdown
19 Miriam Lord: Lofty Leo and pals look back with misty eyes
20 Fintan O’Toole: Bernie Sanders’s former limitation is now his great strength
21 Fianna Fáil and Fine Gael fear they are in a lose-lose scenario
22 Soreness is good, scales are pointless: The 10 biggest myths in fitness
23 Rapist treated drunk schoolgirl ‘like a dog’, judge says
24 Status red ‘severe’ wind warning issued for Galway and Clare as Storm Jorge approaches
25 Steve Martin and Martin Short: ‘I have about 800 cousins coming to the Dublin show’
26 Joshua Allen jailed for 15 months for drugs offences
27 ‘I woke up the next day in a guy’s house covered in bruises’
28 Irish squad in the dark as clouds hang over Six Nations
29 Author Sheila O’Flanagan sees red over school building plan
30 Paul Flynn: Spice bag roast chicken – it’s a bit bonkers but a lot of fun
31 Horse owners embarrassed ‘perfectly good’ stallion sent for slaughter, court told
32 Ryan Baird scores a hat-trick as blue wave rolls over Glasgow
33 Photographs of the year: PPAI awards selection
34 Bogus notion that supply will cure our housing woes
35 ‘Nobody cares’: Children freeze to death as Syrians flee onslaught in Idlib
36 Coronavirus: Where should you sit on a plane to avoid infection?
37 Tree-felling ‘conscientious protector’ convicted of timber theft
38 Suspicions rife as key Brexit trade talks begin in Brussels
39 Netflix: 10 of the best new shows and films to watch in March
40 Clonlara case study: ‘Who the hell gave planning down here, day one?’
Real news has value SUBSCRIBE