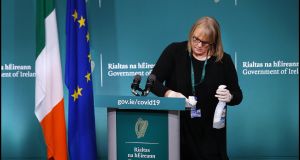 In his analysis of the economic package announced yesterday, Cliff Taylor says the Government did what it had to do

The Government’s Covid-19 economic stimulus package was largely welcomed, although construction unions appeared split over news that the Government would allow work to continue on building sites while asking many businesses to shut until next month to combat Covid-19. Barry O’Halloran reports.

In his analysis of the economic package announced yesterday, Cliff Taylor says the Government did what it had to do, but reckons “many employees – and businesses owners – will also still be concerned about the outlook, worried about when they can reopen and under what conditions”.

And in his column this week, Eoin Burke-Kennedy writes that the economy in the near future will be not just bad but unrecognisable.

The coronavirus fallout continues with the Republic’s five mainstream banks have been dealing with an average of 7,000 calls a day from homeowners since they agreed last week to industry-wide payment breaks for borrowers affected by the economic crisis caused by the spread of coronavirus.

Meanwhile, Joe Brennan reports that the Central Bank has been urged to intervene to address the issue of insurers rejecting Covid-19 claims by businesses forced to close.

Ryanair has offered its fleet of aircraft to European governments, both for rescue flights of citizens left stranded abroad due to Covid-19 restrictions, and to move vital medicines, personal protective equipment and emergency food supplies.

On a more positive front, Simon Carswell talks to businesses who have adapted to the new demands of the crisis, like the gluemaker which is now making hand sanitizer.