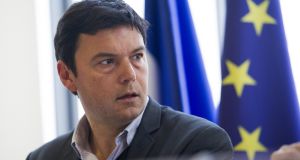 Governments can make “drastic” changes to their economic policies at times of crisis, according to French author and leading economist Thomas Piketty.

“Times of crisis are times when the existing ideologies are challenged and when national and international trajectories are likely to change,” Piketty says during a video interview from his home in locked-down Paris. “The crisis shows us that when governments really want to make drastic changes, it is in fact possible.”

Piketty is director of studies at France’s L’École des Hautes Études en Sciences Sociales and professor at the Paris School of Economics, and has just published a follow-up to his global best-seller, Capital in the Twenty-First Century.

Prior to the Covid-19 pandemic he says it would have been impossible to put air travel on hold as a measure to tackle climate change. But with this new reality, which we are at least temporarily confronted with, that perspective is now changing.

“We are currently witnessing actions by governments throughout Europe and across the world which serve as a real reminder that we need to take crises which reveal themselves over a longer time frame much more seriously,” he says. “If it was possible to invest all this money in banks during the financial crisis bailouts, and in wages right now, it should also be possible to invest in longer-term crises.”

Piketty came to prominence in 2013 with his book, Capital in the Twenty-First Century, an in-depth look at the history of inequality across western societies that was heavily based on new data.

The follow-up title, Capital and Ideology, was released in March, and is broader in scope. Whereas the former focused on inequality trends in western capitalism over the past 200 years, the new book offers a longer history and view on how wealth inequality across the entire world has always relied on ideologies and narratives to support it.

The book is a critique of contemporary global politics and promotes ideas for what he considers would be a fairer system. “As well as this book taking a broader scope in the sense that it is more globally focused,” he says, “it is essentially about the evolution of ideology and political mobilisation of belief systems as the key engine of change for wealth and social inequality.

“The novelty here is that by taking a much broader set of national trajectories, it appears that there are no deterministic forces behind inequality. In particular, purely economic and technological determinants are not sufficient to explain the wide diversities in trajectories we see in societies across the world. We need to invoke ideologies to explain global inequality.”

His premise is that society’s wealthy offer something in exchange for inequality. Law and order, stability, spiritual guidance, innovation and growth are offered as plausible trade-offs.

“Inequality is effectively justified by these narratives,” he says, “and these change over time.”

The economist believes there will be a lot to learn from how the response to the current pandemic is organised across different countries, comparing, for example, South Korea with nations in western Europe, or Africa.

“It will take time to assess and analyse everything to help guide future policy in both health and economics,” he says. “But for now we need to listen to epidemiologists and public health experts very carefully and get through this as efficiently as possible.”