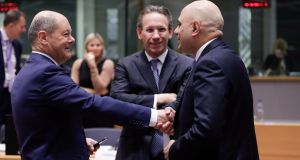 Corporate tax revenues will probably take a €2 billion hit with changes in international taxation that are coming down the road from the Organisation for Economic Co-operation and Development (OECD), Paschal Donohoe said on Tuesday in Brussels. The Minister for Finance said it was vital to prepare and plan now for the inevitable by running sustainable budget surpluses.

“This vindicates the decision that was made by the Department of Finance to begin to review downwards our projected corporate tax receipts from the mid-2020s onwards,” he said

Responding to recent comments by Mr Javid about his aspiration to break from EU regulatory alignment, Mr Donohoe said he emphasised “that if there is an ambition within the UK for an ambitious future trade deal, a level playing field is an absolutely vital and necessary foundation of that kind of future relationship”.

“We will have to ensure, particularly in goods, that everyone is playing by the same rules,” he said, adding that state-aid rules conformity are particularly important in this respect, “a vital prerequisite of any deal”.

Commenting on the storm of protest at the introduction of a higher state pension age from next year, the Minister held out some slight hope that the Government may mitigate the changes for those approaching retirement.

Pension age changes had been well-flagged by previous governments, he said, but “I absolutely understand that, as Irish citizens approach the point at which they may be accessing or claiming the State pension, the fact that the age is changing is of course an issue of great concern to them”.

He promised that, particularly for “those who are required to retire ... we are at the moment exploring whether there are any options in relation to that particular matter”.

On taxation Mr Donohoe said that, among the options being considered within the OECD, “there are some proposals there that would look at a minimum effective tax rate. These are proposals that I have indicated great concern about.

“But there are other proposals there that would look at locating where the tax is paid to where value is created. Any of these kind of developments would have a very significant influence on the global environment in relation to taxation and for global companies and in turn would have an influence on Ireland

“These are changes that are happening at a global level. We can influence them but not determine them as we would be able to do within other organisations and, because of the role of larger countries within the OECD, it’s all the more important that Ireland does begin to plan for change. In the recent forecasts from the Department of Finance that up to €2 billion of corporate tax revenue could be influenced by the OECD changes alone.”

1 Knock gets visit from world’s largest passenger plane
2 Nineteen staff made redundant by Nama share €1m
3 Hard Rock Hotel checks in to Dublin in €30m Tifco project
4 How do you know if you are wealthy? It’s not straightforward
5 Appeals board grants planning for 354 Greystones homes
6 Why Sweden ditched its negative rate experiment
7 Me & My Money: ‘I lost my life savings and more’
8 Store manager unfairly dismissed for hugging staff members awarded €15,000
9 Will Avolon find itself on the block as China prepares to seize troubled parent HNA?
10 Accumulated profit falls at Joe Duffy’s media company
Real news has value SUBSCRIBE