Coronavirus spending to triple British budget deficit to over £175bn 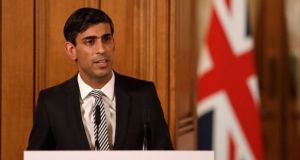 Chancellor of the exchequer Rishi Sunak

Britain’s efforts to keep its economy afloat through the coronavirus crisis are likely to cause its budget deficit to more than triple to over £175 billion (€191 billion) over the coming year, a think tank said on Thursday.

Last week chancellor of the exchequer Rishi Sunak took the historic step of announcing that the government would pay 80 per cent of the wages of workers whose jobs are hit by the crisis if their employees put them on leave rather than sack them.

He is due to set out help for the self-employed later on Thursday, adding to a raft of other measures such as temporary property tax exemptions for businesses in sectors that have been ordered to shut down to slow the spread of the coronavirus.

“It would not be surprising if they were to add around £120 billion to borrowing, more than tripling the amount forecast just weeks ago and pushing borrowing up to £177 billion or 8 per cent of national income,” Institute for Fiscal Studies researchers Carl Emmerson and Isabel Stockton said.

While that would be a smaller deficit than the 10 per cent of GDP hit after the financial crisis, they warned that borrowing could turn out considerably higher if the economy contracts more than expected, or if lots of companies use the government’s employee retention scheme.

Britain’s government is on course to borrow around £47 billion, or 2.1 per cent of national income, in the financial year that ends this month, and budget forecasts just two weeks ago predicted borrowing of £55 billion in 2020/21.

The IFS said big increases in borrowing were the correct response to help households and business through the virus outbreak and reduce a long-term hit to the economy -- something the Bank of England on Thursday said was a risk.

“Hopefully the Covid-19 outbreak will be behind us, but the tax and spend trade-offs facing policy makers will be made more stark for years, and more likely for decades, as they strive to bring debt back down over the longer-term,” Mr Emmerson and Ms Stockton said.