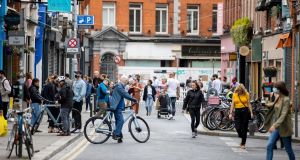 With consumer activity severely restricted in April and May, VAT receipts were 22.7% or €2.2bn down on the same period last year. Photograph: Tom Honan

The coronavirus crisis has punched an €8.3 billion hole in the public finances, according to the latest exchequer returns.

The figures show the Government’s budget deficit – the difference between what it spends and what it takes in in taxes – swelled to €7.4 billion in July as VAT receipts crashed and spending on income supports related to the pandemic soared.

This compared with a surplus of €900 million this time last year, marking a year-on-year deterioration of €8.3 billion.

The headline deficit was driven by a large increase in Government spending, which was 30 per cent up on last year at €38 billion, reflecting increased spending in the Departments of Health and Social Protection.

Social protection spending was 83 per cent or €5.3 billion above profile as a result of increased spending related to the Government’s two wage support schemes for workers affected by the lockdown.

With consumer activity severely restricted in April and May, VAT receipts also took a battering. They were down 22.7 per cent, or €2.2 billion, on the same period last year, reflecting what the Department of Finance described as a “significant decline in personal consumption”. Revenue from the sales tax was down 30 per cent or €692 million in July alone.

Overall, the figures show the Government took in €31.1 billion in taxes for the seven-month period, down 2.5 per cent on last year.

Income tax, the Government’s largest tax channel, generated €12.1 billion, which was only marginally down on last year and above profile.

Corporation tax receipts were €6 billion for the period, which was €1.7 billion, or 40 per cent, above profile.

However, business tax receipts for July were just €165 million, down 62 per cent or €271 million on the same month last year.

While July is not a major corporation tax month, this under-performance, in contrast to the over-performance trend seen in the year to date, serves to underline the volatility of this tax head, the department said.

Minister for Finance Paschal Donohoe said while the figures were stark the total tax performance was “very much in line with what we were expecting”.

He said that despite all that had happened, including the upheaval to business and to families, there were still some positive signals, including the fact that the tax-take was down only 2.5 per cent compared to a year ago.

“While the figure is big, the percentage change is a better-than-hoped-for performance,” he said at a media conference to coincide with the publication of the figures.

He said there continued to be a strong performance in corporation tax, but a more significant indicator was that income tax at the end of July was nearly unchanged compared to a year ago.

“In July [income tax] was down 8 per cent compared to July 2019. In the context of the unprecedented loss of jobs for many months, that income tax [figure] is a positive note in our total tax collection.”

He said two factors underlined that. The first was that strong sectors of the economy such as technology, pharma and exports continued to perform well.

The second was the sectors that have suffered most were those that employed most part-time workers – and that meant a smaller fall-off in tax revenue.

However, he said the figures showed the effects of changing consumption. He said excise was down 18 per cent, for example.

He said the July stimulus offered a huge array of different measures worth over €5 billion of tax changes. It was a priority of all government departments to make sure they were implemented.

The projected deficit of €30 billion remained the same, he said, and there were no changes of estimates for the borrowing requirements for 2020 and 2021.