Coronavirus: Pace of manufacturing decline slowed in May 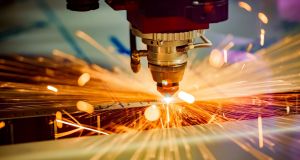 Irish manufacturers were more optimistic about the coming 12 months in May than in April. Photograph: iStock

Irish manufacturing’s collapse continued in the face of coronavirus restrictions last month, but at a slower pace than in April, according to figures released on Tuesday.

The AIB Ireland Manufacturing Purchasing Managers’ Index (PMI) shows the industry fell sharply in May as the Republic remained under a Government-mandated lockdown meant to contain the spread of coronavirus.

Manufacturing hit 39.2 on the index in May, according to the bank’s figures, an increase on the previous month’s reading of 36. This shows that the industry continued falling last month but the pace of the decline slowed.

AIB’s Ireland Manufacturing PMI takes 50 as its benchmark. Any reading above that figure means that manufacturing expanded on the previous month, while any result below that shows that it shrank.

AIB chief economist Oliver Mangan warned that the figures painted a downbeat picture of manufacturing in the Republic for the third month in a row as lockdowns continued to squeeze activity.

“Manufacturing output remained weak, with nearly 60 per cent of respondents reporting lower production in May,” he said.

“Total new orders, including for exports, are mired at historically low levels, although their rates of decline eased.

“Employment in the sector continued to contract, but the pace of job shedding did slow appreciably from April,” Mr Mangan added.

The economist noted that manufacturing was continuing to perform better than during a severe recession in 2008-2009, when the index hit a record low of 33.2.

The outlook for the next 12 months has also improved but remains at a relatively low level historically, according to Mr Mangan.

May’s figure was the eighth-lowest on record but still far short of the 45.1 the index reached in March, when the State first began imposing restrictions to combat coronavirus.

New orders – an important indicator of how a business might perform in the near future – improved in May for most survey respondents, but still showed continuing decline.

As many countries remained under their own virus lockdowns, new export orders fell at the second-fastest rate since the index began in 1998.

The prices manufacturers paid for raw materials and other supplies fell as demand toppled and global oil charges weakened in May. However, the rate at which prices declined eased from April.

Irish manufacturers were more optimistic about the coming 12 months in May than in April, AIB says.

“The Irish data are in line with global trends,” Mr Mangan said, adding that manufacturing figures for the euro zone, US and UK show declines continued in May but at a slower pace than in the previous month.

The PMI is compiled from responses to questions sent to 250 manufacturers in the Republic.

1 My aunt never told us that Gran passed away with no will
2 Ryanair to slash 1,000 flights from August and September schedules
3 Green Party TD queries ‘usefulness’ of another appeal in €13bn Apple tax case
4 The $6bn judgment pitting Nigeria against Irish businessmen
5 Government to push through €2bn credit guarantee scheme next week
6 If it’s safe to do so, could this be the time to spend for Ireland?
7 Costs and borrowing rules locking a generation out of home ownership, builder warns
8 McKinsey warned Wirecard a year ago to take ‘immediate action’ on controls
9 Majority of employees don’t want to return to pre-Covid working patterns
10 Covid anxiety among domestic holidaymakers could sink this summer
Real news has value SUBSCRIBE