Inflation in March was 0.7%, its lowest in five months, with further weakening in store 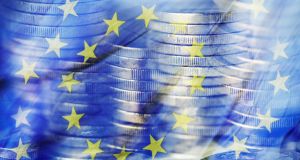 The European Central Bank will funnel more than €1.1 trillion into the economy this year. Photograph: iStock

Euro-area inflation slowed to its weakest pace in five months, driven by a collapse in global oil prices.

The softness in price growth is likely to deepen further in the coming months as restrictions imposed to slow the spread of the coronavirus pandemic bring activity across the 19-nation economy into a standstill.

March inflation stood at 0.7 per cent, the lowest since October and down from 1.2 per cent the previous month, Eurostat said on Tuesday. Economists predicted the rate would fall to 0.8 per cent. The core measure of price pressure, which strips out volatile components such as food and fuels, slowed to 1 per cent.

There was a 4.3 per cent year-on-year drop in energy prices, while unprocessed food costs jumped 3.5 per cent, the most since September 2018.

With the euro area bracing for its worst slump in history, the European Central Bank has raced to provide support. It will funnel more than €1.1 trillion into the economy this year through a series of asset-purchase programs, while governments have also announced massive fiscal stimulus to cushion the economic impact of the virus.