Survey shows morale at lowest level since May 2009 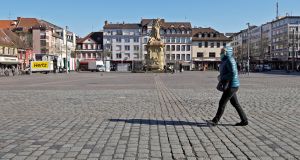 German consumer morale deteriorated sharply heading into April to hit its lowest level since 2009, a survey showed on Thursday, suggesting that the coronavirus pandemic is putting the brakes on household spending in Europe’s largest economy.

The Nuremberg-based GfK institute said its survey of around 2,000 Germans showed consumer sentiment falling to 2.7 points from a revised reading of 8.3 points a month earlier. This was the lowest reading since May 2009 and undershot a Reuters poll of analysts who had expected a much less pronounced drop to 7.1 points.

“In light of the current development, we are withdrawing our consumer forecast of 1 per cent growth for 2020,” GfK researcher Rolf Buerkl said. “Retailers, manufacturers and service providers must prepare for a recession,” Mr Buerkl said, adding that GfK could only give a new forecast once there is clarity how long measures to contain the spread of the virus will remain in place.

Consumers’ expectations regarding their personal income as well as the overall economic development decreased sharply, the GfK survey showed. The propensity to buy also deteriorated.

“Retail as a whole is facing tough times ahead,” Mr Buerkl said, though the pandemic was also providing drug and grocery stores with a jump in sales of 14 per cent on the month. This growth was primarily driven by stock-piling purchases which led to an increase in sales of up to 200 per cent in some categories, he added. – Reuters