Consumer prices up 0.2% in year to March on foot of education fees and insurance

Education, alcohol and tobacco among drivers behind increase, CSO says 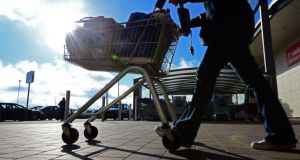 
Inflation turned positive again last month, with the latest figures from the Central Statistics Office showing that consumer prices climbed by 0.2 per cent in the year to March. This compared to a drop of 0.1 per cent in February.

Notable annual increases came in education, where prices were 4.6 per cent higher as third-level fees climbed, while alcohol and tobacco increased 3.5 per cent, as excise duties rose due to changes introduced the budget.

A rise in the cost of health and motor insurance premiums, combined with the local property tax levied on householders, also contributed to inflation.

On the other side of the equation, the cost of clothing fell by 4.2 per cent over the year, with communications down 3.1 per cent.

On a monthly basis, prices rose by 0.7 per cent, lifted by more expensive clothing and footwear, and transport, as the cost of flying increased.

Even with the positive average for March, however, economists continue to identify deflation (or falling prices) rather than inflation as the bigger threat to the economy, and not just in Ireland.

“Although the global economy is likely to be stronger this year than in 2013, which may eventually lead to higher oil/energy prices, inflationary pressures in general are set to remain well-contained,” Alan McQuaid of Merrion Economics said.

“While ECB rates and energy prices continue to act as a drag on prices, domestically driven services price inflation is now growing at the fastest rate in two years, in line with the recovery in the Irish economy,” he said.

The overall services index rose by 2.1 per cent, while the goods index declined by 2.3 per cent, the CSO said. When mortgage repayments were excluded, services prices were 3.3 per cent higher, year on year.

Isme, the group representing small businesses, seized upon increases in “State-influenced costs” and local charges, warning that businesses could not continue to create jobs as long as Irish costs remained higher than those of our competitors.


Health premiums
A breakdown of the overall index showed that prices rose on an annual basis in areas that will reasonate with many consumers, with health insurance up by 9.6 per cent and motor insurance rising by4.4 per cent. The price of wine was ahead by 8.2 per cent.

On a monthly basis, airline fares were 16.4 per cent more expensive, while clothing prices rose by 3.1 per cent.