In 2014 Morgan Kelly predicted where fresh trouble would come from: SMEs 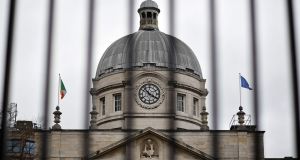 Just months after the Republic crawled in late 2013 out of an international bailout programme precipitated by the property crash, one of voices that called the bubble, Morgan Kelly, pointed to where he expected a fresh swell of trouble would come from: SMEs.

Nama had, by then, taken most of the toxic commercial property loans out of the banks, and lenders were a year into meeting quarterly Central Bank targets to restructure unsustainable mortgages.

But with swathes of Irish small- to medium-sized enterprises (SMEs) saddled at the time with large property debts run up by their owners, Kelly predicted many would face sudden liquidation as banking regulators pushed for a clean-out, unleashing untold damage on employment and the economy.

Happily, that wave never came. While the job of resolving the mortgage arrears crisis has been torturous, drawn-out and still not complete, most SMEs with exorbitant property loans – but viable underlying business – were able to restructure their borrowings quietly. Of course, this was not without pain, and usually involved the sale of property and other assets in exchange for some debt write-offs.

SMEs accounted for more than 1 million employees in the State before the crisis, or just over two-thirds of the workforce in the Irish business economy

But, on the whole, Irish SMEs proved to be remarkably resilient. The total amount of debt on Irish-resident private-sector businesses has fallen 70 per cent since the 2008 crash, according to Banking & Payments Federation Ireland. SME loans have declined to €21.5 million, while the number of small firms with no debt has risen over the past decade or so to just under 60 per cent, leaving the general finances of SMEs in decent shape – before the coronavirus pandemic struck.

SMEs accounted for more than 1 million employees in the State before the crisis, or just over two-thirds of the workforce in the Irish business economy, according to the Central Statistics Office. Almost 420,000 were working in areas that have been highly affected by the effective shutdown of the economy, including bars, restaurants, retail and the leisure sectors, the Central Bank said in a report last month, with a further 350,000 in what describes as “modestly affected sectors”.

Most of the one million people who have had to take Covid-19 unemployment benefits or who are having their salaries topped up by a Government wage subsidy scheme, because of a collapse in their companies’ revenues, came from the SME sector. While Ireland is a well-known mecca for tech and pharma multinationals, it has a relatively small number of large indigenous corporates, leaving it more dependent than many other western economies on small SMEs.

How SMEs come through this crisis will determine the fate of the economy and unemployment numbers, and whether banks merely face a manageable spike in business and mortgage defaults or another existential threat.

The Central Bank estimates that SMEs will need €2.5 billion-€5.7 billion of financing over a three-month period to help them meet their obligations during the crisis and be in a position to drive an economic recovery.

And while Ireland was among the first out of the traps in Europe in March to announce a range of pandemic supports for the health system and economy, it has since been long overtaken by a number of other countries.

Moving to catch up, Minister for Finance Paschal Donohoe unveiled plans at the start of this month for a €2 billion loan scheme where the State would guarantee 80 per cent of new loans to SMEs of €10,000-€1 million. These loans would have interest costs “below current market rates” and terms of up to six years.

As things stand banks are planning to tighten up their lending standards, according to a recent Central Bank survey. They can’t afford to lend recklessly, and the presence of a guarantee can make all the difference in cases when the viability of a business is borderline.

The planned level of Irish cover falls short of 100 per cent guarantees that are on offer in other European countries such as Austria, Germany, Switzerland and, belatedly, the UK. Boris Johnson’s government said this week that its 100 per cent state-backed “bounce-back loan scheme” for facilities of up to £50,000 (€55,900) had attracted a much greater response from banks and firms than a longer-running business interruption plan, which covered up to 80 per cent of loans up to £5 million.

While critics argue that the level of State backing planned for the Irish scheme doesn’t go far enough, there’s an argument for some element of risk-sharing with the banks to avoid moral hazard issues. Besides, the country’s recent experience of all-out guarantees didn’t end very well.

But the biggest concern is that the Irish scheme – and a plan for Revenue to “warehouse” tax debt accrued by companies during the lockdown for up to 12 months after a business resumes trading – is that both need a new government to be formed to pass enabling legislation. (Plans for the Ireland Strategic Investment Fund to invest up to €2 billion in medium to large companies in the form of debt, equity or hybrids of both don’t need new laws.)

Posturing since the last election passed the 100-day mark last Monday. And efforts to get the Green Party to join an uneasy coalition with Fine Gael and Fianna Fáil have been complicated in recent days by talk of a leadership battle in the Greens. The latest is that all sides hope a draft programme for government can be concluded by the end of next week.

In the meantime the slow reopening of the economy has commenced, and Irish SMEs are at a clear credit disadvantage to those in the UK and elsewhere in Europe. Bad as it is for a domestic-focused business, those reliant on exports – particularly firms that have been focusing in the past few years on cracking markets beyond a post-Brexit Britain – are now finding themselves at a distinct competitive advantage.

The pandemic has underscored, if a reminder were needed, how nation-first politics trumps calls from Brussels for unity every time Europe is caught up in a crisis. Open economies such as Ireland’s that don’t have large domestic markets are most exposed.

Businesses are paying the price for the lack of a government. The economy will, too.

1 In six months we will be in the grip of a 1980s-style recession
2 Angela Merkel sweeps in to save the euro zone
3 Stocktake: Has Warren Buffett lost the magic touch?
4 Chartered Land moves closer to approval for Dublin’s tallest tower
5 Brother is dragging his heels as executor of uncle’s will - is there anything I can do?
6 Property price drop of up to 12% this year a ‘reasonable’ assumption – McDonagh
7 Avoca wins battle with Monkstown locals over cafe operation
8 Aer Lingus wants quarantine period axed to resume flights in July
9 Donohoe warns of cost of pandemic as budget deficit swells to €6.1 billion in May
10 Ibec warning, Jurys plans and what to do with Facebook and Twitter?
Real news has value SUBSCRIBE