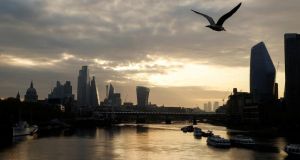 The city of London financial district and the river Thames

Britain plans to buttress the City of London’s global competitiveness and openness once it moves outside the EU with new financial services sector legislation.

Although Britain left the EU in January its unfettered access to the EU for banks and other financial firms does not end until December, when transition arrangements expire.

The reference to world-leading prudential standards will reassure regulators in Britain who have cautioned about being given a formal remit to maintain the competitiveness of London as a global financial centre when writing new rules, fearing it would weaken standards.

The EU, the City of London’s biggest customer, has said it will give UK clearing houses temporary access but will not allow banks in London to offer services directly to customers in the bloc, forcing them to shift activities to new EU hubs.

Mr Glen, speaking at a City Week online event, declined to elaborate on Britain’s negotiations with the EU on financial market access, but noted that a sector that pays £75 billion in tax each year was at the centre of the government’s efforts to secure trade deals with countries across the world.

Mr Glen said Britain was reviewing how it sets financial rules that for decades were written in Brussels in order to make the most of leaving the EU.