Survey shows growth, investment and recruitment plans are at risk 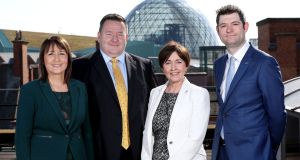 One in four firms in the North has revised plans for their business as a result of the UK’s EU referendum vote, with the majority likely to pause or freeze growth, investment and recruitment plans, latest research shows.

The Quarter 2 Economic Survey published on Tuesday by the Northern Ireland Chamber of Commerce and Industry and business advisers BDO also highlights that, since the Brexit vote, local companies are becoming increasingly concerned about the future value of sterling.

Ann McGregor, chief executive of the NI chamber said its members are most worried about the implications of leaving the European Union, particularly in relation to future trading rules and the status of European regional funding.

Ms McGregor said: “The lack of information available post-Brexit is a concern for our members, with a significant majority having already revised or expecting to revise their growth plans.”

She said about 50 per cent of companies expect to put investment decisions on hold.

The results of the survey suggest the North’s economy was growing during the second quarter of this year but business confidence dipped just before the EU referendum result was announced.

Both the local manufacturing and service sector delivered a much more positive performance in quarter two although there were early indications of difficulties ahead for manufacturing businesses.

However, following the Brexit vote, the picture is less upbeat as firms in the North struggle to establish exactly what the result will mean for their day-to-day business operations.

Among their key concerns is the future immigration status of their EU employees. A significant number of businesses reported in the latest survey that a “skills mismatch/shortage” was already hampering economic and business growth in the North.

“I am confident that businesses in NI will in fact make the most of the positives, positives such as the advantages our exporters and our hospitality sector are benefiting from as a result of the weaker pound.”

1 Majority of employees don’t want to return to pre-Covid working patterns
2 Investors in Irish solar energy fund in line for €20m payout
3 Norwegian airline sued in Dublin by inflight caterer
4 Homeworking is depriving me of juicy gossip
5 If tourists are such pariahs should we not be testing them on arrival?
6 Cigarette sales, Leo to meet the banks, and Arclight’s €20m payout
7 Tobacco giant’s menthol-ban substitutes take 5% share of Irish market
8 ‘I set up an investment club many years ago with a bunch of friends’
9 Government should set a benchmark for any permanent increases in spending
10 Varadkar and Donohoe to meet banks to discuss mortgage breaks
Real news has value SUBSCRIBE