Brexit minister says UK could still walk away with no deal 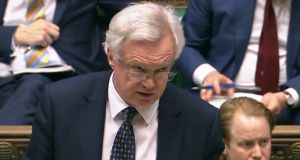 David Davis: he said the government had looked at contingency plans for walking away without a deal

Britain’s Brexit minister David Davis has said Britain could still walk away from negotiations with the European Union with no deal. He said it was important to keep that option as talks over the terms of Britain’s departure from the bloc begin.

Mr Davis said the British government had looked at contingency plans for walking away without a deal, and it was an important option in order to get the best deal for Britain.

“If you go into a negotiation without the ability to walk away then you will have a poor outcome in that negotiation,” he said on BBC radio, adding that he expected Britain would be able to agree a deal with the EU.

A day after she was forced to promote prominent Brexit hardliners in her bid to cling to power, Mrs May is set to face furious lawmakers from her Conservative Party in a showdown that could signal the end of her premiership.

Mrs May will hear first-hand the anger of Conservative members of parliament who blame her for the catastrophic election campaign that saw the Tories unexpectedly lose their parliamentary majority.

Graham Brady, the lawmaker who heads the backbench 1922 committee of rank-and-file Tory lawmakers, said “there will be lots of colleagues wanting to air their concerns”.

Ministers including foreign secretary Boris Johnson and trade secretary Liam Fox rallied to Mrs May’s side, saying the time was wrong for a leadership challenge or another general election.

Mr Johnson earlier denied newspaper reports that he would try to unseat Mrs May. “It’s the height of self-indulgence to go in for this sort of thing.”

Mr Davis said on Monday in an ITV interview, when asked about the chances of Mrs May being dislodged by her party, “I’m a 100 per cent unswerving supporter”.

Mrs May’s plans have been thrown into chaos along with the UK’s entire political landscape following last Thursday’s vote. The prime minister was unable to carry out wholesale cabinet changes that had been mooted before the election, with most ministers staying in the same jobs.

Mrs May named Michael Gove, who unsuccessfully ran against her for the party leadership last year and whom she then fired from the ministry of justice, as her new environment secretary.

She also appointed leadership challenger Andrea Leadsom to leader of the House of Commons, putting her in charge of pushing Brexit-heavy legislation through parliament.

Yet she promoted her close friend Damian Green to first secretary of state, making a Remain campaigner her second in command in an indication that Mrs May could be preparing to soften her Brexit stance.

Mrs May appeared to acknowledge her time was limited when she was asked if she would stay in her post until the next election, scheduled to be held in 2022.

“I said during the election campaign that if re-elected I would intend to serve a full term,” she told Sky Television on Sunday evening. “But what I’m doing now is actually getting on with the immediate job, and I think that’s what’s important.”

One sign of Mrs May’s weakness is the appointment of Mr Gove, who ran for the Tory leadership in the wake of the Brexit referendum after betraying an earlier agreement to back Mr Johnson.

A rift between Mr Gove and Mrs May developed during the prime minister’s time in the Home Office and his in the department for education in David Cameron’s coalition government and she fired him when she became prime minister. – Agencies