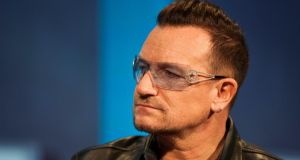 U2 frontman Bono defended Ireland’s tax system and the use of Irish companies by multinational companies to reduce their global tax bills. Photograph: Ramin Talaie/Getty Images

U2 frontman Bono defended Ireland’s tax system and the use of Irish companies by multinational companies to reduce their global tax bills, saying that the country was “very pleased to compete on that front”.

Speaking at the annual meeting of the Bill Clinton’s family philanthropic organisation in New York, the rock singer interrupted the Sudanese telecoms billionaire Mo Ibrahim who, during a discussion on Africa, referred to Ireland as an example of how the global taxation system was broken.

Bono’s comment at the Clinton Global Initiative meeting came just days after he defended U2’s use of offshore companies to reduce their taxes in an interview, saying that the band’s tax policy was in line with Ireland’s competitive tax philosophy which had taken the country out of poverty.

Asked by Mr Clinton how big companies such as Google could best use their money in African communities, Mr Ibrahim said, in an impassioned plea, that big companies should pay taxes in Africa.

‘Not acceptable’
“All those big companies don’t pay taxes in Africa. That is just not acceptable,” he said. “People need to stand on that issue. Frankly, the whole taxation system around the world is really broken because business gone global but our taxation system is still country-based and then countries compete.”

The Clinton Global Initiative annual meeting, which is similar to the annual Davos economic think-in in Switzerland, brings together heads of state, chief executives of big companies, philanthropists and non-profit groups to discuss ways to try to solve the world’s problems through sponsored projects.

Bono challenged ExxonMobil, a sponsor of the event, and other US oil producers to drop their opposition to US transparency laws aimed at forcing companies to report how much they pay African states on oil, gas and mining projects to encourage the proper flow of wealth to citizens in those countries.

Describing himself as “no cranky anti-corporate critic,” the rock star-turned-activist said that “people want to know what their tax is actually achieving and they want to know where it’s going.”

‘Rich in resources’
African countries were “extremely rich in resources” but poor because these “extractive industries are not returning the wealth to the people in any kind of fair measure,” he said.

While praising big companies for their philanthropic efforts in some areas, Bono criticised their failure to disclose how much they were paying African governments for contracts to extract oil and minerals. “You cannot have it both ways – you can’t give alms to the poor on one level and have your hands on their throat on another,” he said.

Former Taoiseach Bertie Ahern, who attended the Clinton meeting, rejected the notion that the Irish Government was doing “special deals with multinational companies.”

“We have a straight-line system that has not got hidden negotiations or shelters,” he told The Irish Times.

Mr Ahern declined to comment on whether the Government’s banking inquiry should be delayed until the Anglo Irish Bank criminal trials were concluded.