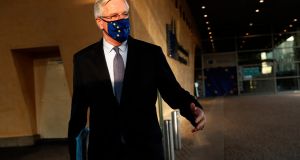 Chief EU negotiator Michel Barnier: no certainty a deal can be clinched by a mid-November deadline. Photograph: Francisco Seco/AP

Intense negotiations between the European Union and Britain in the past weeks have failed to reach a breakthrough and the bloc is prepared for the possibility that no deal might be reached, chief EU negotiator Michel Barnier said after talks broke off.

Time is running out to clinch agreement to avoid deep disruption to trade between the closely entwined EU and UK economies after the end of the transition period on December 31st. Hundreds of billions of euro in trade are at stake, with the potential for an economic blow that could worsen the downturn caused by the coronavirus pandemic.

In briefings to ambassadors from member states, Mr Barnier said he would continue to work intensively until the last possible moment to find a deal but that difficulties remained on a range of issues, including long-held fundamental points of disagreement.

The negotiations are highly complex, involving everything from trade in energy to the recognition of professional qualifications in a relationship that has become ever closer over the decades.

The two sides have long been divided on three key issues: what authority would resolve disputes; how to ensure similar rules to create fair competition between companies; and EU access to British fishing waters.

As he prepared to brief EU parliamentarians, Mr Barnier wrote on social media that “despite EU efforts to find solutions, very serious divergences remain” in all three areas.

“These are essential conditions for any economic partnership,” he wrote, adding that the EU is “prepared for all scenarios”.

Britain’s chief negotiator, David Frost, wrote that he agreed with Mr Barnier’s assessment. “Progress made,” he wrote on social media. “Wide divergences remain on some core issues. We continue to work to find solutions that fully respect UK sovereignty.”

Mr Barnier’s update was that too much difference of opinion remains on fundamental issues and that the British had not reciprocated to EU offers of compromise, according to people familiar with the briefings, who described a feeling that the British side only wanted a deal on their terms.

London has pushed for political leaders to wade in to break the deadlock on the most difficult issues. But unlike in the negotiations around the withdrawal agreement, in which there were just a few key issues to resolve, in this case the EU side believes that there are too many outstanding subjects to solve through political horsetrading.

EU leaders had previously said this week was the last chance to reach a deal in time for it to be ratified and implemented, but have since suggested that talks could run another week to find an agreement.

Talks have now broken off between the two sides and are expected to resume in London on Sunday. One senior diplomat said that Mr Barnier had given no certainty a deal could be clinched by a mid-November deadline.

“He gave no timeline and he was rather uncertain about a deal,” the diplomat said.