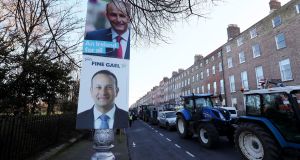 There is always a risk is that the parties will try to win our votes with promises funded by money that may not materialise. Photograph: PA

The parties are about to launch their manifestos. And as their basis they will be using updated Department of Finance estimates for the public finances in the term of the next government. These predict that there will be €11 billion in “unallocated resources” in the next five budgets – on the face of it plenty to fund party promises. But “unallocated resources” does not mean money that whoever is finance minister will necessarily have to allocate on budget day to new spending projects or tax cuts. In particular, future public pay increases and other inflationary pressures are likely to eat up a lot of the cash. So the risk is that the parties are going to try to win our votes with promises funded by money which may not actually be there. This is not uncommon for an election campaign, but the parties can’t do this and at the same time claim to be super prudent in their management of the public finances. Here are the things to watch.

Budget 2020 was drawn up on the basis of the UK leaving the EU without a withdrawal deal at the end of this month. This now won’t happen. Because of this, the Department of Finance recalculated the budgetary outlook for this year and subsequent years on the basis of a more rosy scenario, which is that the EU and UK will conclude a trade deal and avoid a hard Brexit. Economic growth is expected to be 3.9 per cent this year, falling gradually to 2.5 per cent by 2025 – slower than the growth surge of recent years.

1 DUP pleads with UK to reduce salary threshold for migrant workers coming to North
2 ‘If all the immigrants go back, who will work in the meat factories and do the crap jobs?’
3 A Russian cruiser with ‘cannibal rats’: What other ‘ghost ships’ could be out there?
4 Jewish council dismayed at Sinn Féin TD’s ‘unacceptable’ tweets
5 Gardaí investigating four-lane motorway sulky race
6 Person claiming to represent ‘ghost ship’ owner comes forward
7 Love Island tribute to Caroline Flack hides the truth
8 Expert tips: A dentist on how to have perfect teeth
9 ‘At least eight shot dead’ in German town of Hanau
10 Finn McRedmond: Johnson pulls up drawbridge on immigration
11 Jim Mansfield Jnr denied permission to attend mother’s birthday party in Spain
12 Letter from Caroline Flack describes inner turmoil as inquest opens
13 Miriam Lord: Photo-ops give way for occasional talks
14 Planners probe Dermot Bannon’s garden bath den
15 The best places for a family lunch: try these 10 great spots
16 Violinist plays to save her music as surgeons remove brain tumour
17 How can I view my dead brother’s will if I’m not the executor?
18 How is UK changing immigration system and how will it affect Ireland?
19 The Irish Times view on the UK’s migration rules: crude and self-defeating
20 Woman sues over catching Legionnaires’ Disease in luxury hotel spa
21 I’m worried about my neighbour’s new ‘shed’ and what he intends to use it for
22 Ireland keep same line-up but Bono and Paul O’Connell join backing band
23 Paraic O’Donnell: MS is meticulously destroying me. I am being unmade
24 Irish backpackers in Australia can extend visas to help bushfire recovery
25 Just 8,000 houses built last year offered for sale on open market, says CIF
26 Department denies asylum seekers leapfrogging social housing lists
27 Fine Gael should swallow its pretend humility
28 Galway ring road will have ‘significant residual effects’ on bats and peregrine falcons
29 Trump calls for attorney general Barr to ‘clean house’ in justice department
30 David Baddiel comes to Ennis to meet a Holocaust denier
31 Store manager unfairly dismissed for hugging staff members awarded €15,000
32 Memo to Sinn Féin: Not ‘Southern State’ or ‘Free State’, the name is Ireland
33 Two candidates for Ceann Comhairle are Denis Naughten and Seán Ó Fearghaíl
34 ‘Some people said that’s a death threat’: Dancing with the Stars priest reports abuse
35 Walk for the Weekend: Rambling on the white sands of Inishbofin, Co Galway
36 UK immigration rules ‘spell disaster’ for care and hospitality sectors
37 New Sinn Féin TD apologises for ‘glib, off-the-cuff tweets’
38 Appeals board green lights Bartra’s Rathmines ‘co-living’ plan
39 Over-reliance on inhalers putting asthma sufferers at risk
40 Dublin schoolboy (14) appears in court charged with rape
Real news has value SUBSCRIBE