After a wave of suicides and bankruptcy, government wants to formalise non-bank lending 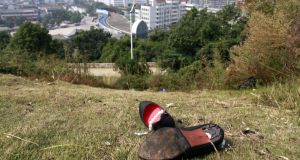 Broken shoes on a hill in Wenzhou: the city was hard hit by 2011’s credit crunch. photograph: qilai shen/bloomberg

On the surface it sounds sinister, a world of shadow banking and underground lending which has sown confusion across the country, especially in China’s most entrepreneurial city, Wenzhou in the eastern province of Zhejiang.

A new rule to legalise underground lending has been in the pipeline for a long time and follows on from a government decision in 2012 giving private firms in Wenzhou permission to set up lending businesses to try and stem underground banks, which were charging high interest rates to borrowers. The move is due to be implemented on March 1st.

Wenzhou was hard hit by the credit crunch in 2011, when entrepreneurs in Wenzhou disappeared, took their own lives or declared bankruptcy. This caused a surge in the number of law suits concerning private lending disputes in the city to 19,446 in 2012, from 2,896 in 2007.

In 2012, Zhejiang provincial higher court upheld a death sentence on Wu Ying, a businesswoman convicted of cheating investors out of several hundred million yuan. The decision was later overturned.

The latest move aims to turn underground lending into an acceptable form of credit to benefit small and medium- sized firms that find it difficult to obtain loans from banks.

SMEs are important in the world’s second biggest economy, accounting for 65 per cent of GDP, 50 per cent of taxes and eight out of 10 jobs.

The new regulation requires borrowers to file with local financial authorities if a single loan exceeds three million yuan (€360,000), multiple loans accumulate to 10 million yuan (€1.19 million), or when more than 30 people are involved as lenders.

“If there are private borrowers which still don’t meet those standards, we encourage them to file with financial authorities and we will offer them policy support,” a government official told the Global Times newspaper.

To make sure the practice stays clean, civil servants from local financial management departments are also forbidden to participate in private financing activities.

There is clearly a need for reform. According to a survey of more than 28,000 families from the Chengdu-based Southwestern University of Finance and Economics, almost half of families in China have been involved in private lending. The figures show that about 49 per cent of families in China’s western regions had participated in private lending – about 46 per cent in central China and 38 per cent in eastern China.