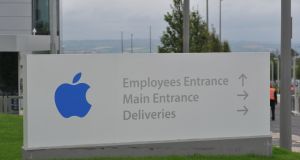 A lawyer for Apple has rejected claims by the European Commission that its alleged sweetheart tax deal with Ireland was partly designed to give the company a boost in exchange for jobs in Cork. Joe Brennan reports from the court in Luxembourg.

There is a significant risk of a no-deal Brexit on October 31st, Minister for Finance Paschal Donohoe has warned, noting that preparations for such a scenario now had the highest priority across Government. He was speaking at the PwC/Irish Times tax summit in Dublin, where columnist Chris Johns said the UK government is pursuing a “Jacobite solution” to Brexit and is “willing to destroy anything in fanatical pursuit” of its aims.

The motor trade is pleading with the Government to tighten regulations on used-car imports amid stark warnings of job losses and a dramatic decline in new car sales in the face of Brexit.

On the corporate news front, the acting chief executive of troubled travel software developer Datalex told its agm yesterday that former management misled the board. It follows a board-commissioned review, which found significant accounting irregularities at Datalex last year,

On a happier note, acquisitive medical supplies group Uniphar has reported strong maiden results as a listed company, with a 20 per cent rise in sales.

Richard Barrett’s Bartra Capital has been refused permission for a second time on a plan for a seven-storey 102 bed-space build-to-rent co-living development in Rathmines.

Fiona Reddan considers the Government’s so-called ‘affordable housing’ strategy in her column this week, arguing that the market realities make a mockery of the proposals.

In a bumper Commercial Property section, Ronald Quinlan reports on how investors Hines and Davy are vying for a majority stake in the Stephen’s Green Shopping Centre, and news that German global real estate investment group Deka Immobilien is closing in on a deal to acquire Dublin’s five-star Marker Hotel for aroundbout ¤130 million.

Finally, more than 30 years after Live Aid plans are afoot for a “10-hour global media event that will span five continents” on September 26th, 2020, to raise funds for a variety of causes.

And, budget 2020 is looming so why not get all the latest news, analysis and comment on our dedicated site.

1 ‘The recovery needs to be a full-scale economic renewal’
2 Ryanair expects air fares to fall when flights take off again
3 Tax and the Pandemic Unemployment Payment: Your questions answered
4 Household savings soar as consumers stop spending
5 Revenue fears fraudsters tapped bank details of 3,000 taxpayers
6 Joint accounts: if one of us dies, can the other access the money?
7 Charlie Chawke plans 290 apartments and hotel on Goat pub site
8 Tobacco makers still trying to make a mint from Irish menthol market
9 Irish companies come out in force to help during Covid-19 pandemic
10 ‘Never mind GDP; the most fundamental job of any leader is to keep his people alive’
Real news has value SUBSCRIBE