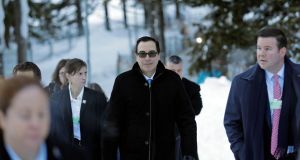 Steven Mnuchin, the US treasury secretary, walks through the snow during at Davos. Mr Mnuchin said he isn’t concerned about short-term fluctuations in the dollar, a day after he suggested a weaker US currency would help trade. Photograph: Markus Schreiber / AP Photo

US treasury secretary Steven Mnuchin has been forced to quell speculation that a currency war could be on the horizon, after his comments on Wednesday about a weak dollar being good for the world’s largest economy triggered a fresh sell-off in the currency.

Speaking to reporters at the World Economic Forum (WEF) annual conference in Davos on Thursday, Mr Mnuchin: “I thought my comment on the dollar was actually quite clear yesterday. I thought it was balanced and consistent with what I said before, which is: we are not concerned where the dollar is in the short term.”

The former Goldman Sachs banker’s original comments prompted speculation that the US was wavering on its strong dollar policy in favour of a weaker greenback as an additional tool to boost trade under US president Donald Trump’s “America First” agenda. The dollar was down 1 per cent on Wednesday against a collection of other major currencies, to a three-year low.

The clarification came before Air Force One touched down in Zurich around 11.30am on Thursday and Mr Trump set off in a helicopter for his much-anticipated arrival at the WEF, where he is set to address global business and political leaders on Friday.

International Monetary Fund managing director Christine Lagarde had earlier on Thursday urged Mr Mnuchin to explain, adding that US tax cuts will probably cause the dollar to rally.

“It’s a very, very liquid market, and we believe in free currencies,” Mr Mnuchin said on Thursday, adding: “There’s both advantages and disadvantages on where the dollar is in the short term.”

Also speaking in Davos, British chancellor of the exchequer Philip Hammond said a weaker dollar may help alleviate US concerns about the “fairness” of global trade.

“Hopefully, the depreciation of the dollar and the opportunities that creates will help to create a sense of a more level playing field without having to reach for tariffs,” Mr Hammond said.

He added that the British government was happy with the current strength of sterling, saying a stronger pound will tame inflation and help real wages.

The treasury secretary reiterated that the dollar’s strength over the long term was reflective of the strength of the US economy. That’s the message that’s also coming out of the White House, which sought to assert its control over US currency policy following Mr Mnuchin’s initial remarks amid a day of oscillating messages that spanned two continents.

“Currently we have a very stable dollar because of how well the US is doing, and it’s as powerful as it’s ever been,” White House spokeswoman Sarah Sanders said on Wednesday at a briefing in Washington. “We believe in free-floating currency. The president has always believed in that.”

While the world’s largest economy is indeed going strong, the dollar’s 10 per cent decline since President Donald Trump took office belies her assertion that the currency is very stable. The losses have steepened of late.

For a quarter-century, US treasury chiefs have espoused the benefits of a strong dollar, so it may be jarring for investors to hear a treasury secretary discuss the merits of a weaker one. But it fits with the Trump administration’s stance on trade policy aimed at supporting exporters and reducing the nation’s gaping trade deficits.

Mr Trump too has signalled his preference for a softer dollar. He said in an interview with the Wall Street Journal in April that because of confidence in him as president, the currency was rising, but that such strength could become harmful to the economy. - Additional reporting, Bloomberg