Trump predicts ‘tremendous increase’ in trade between UK and US 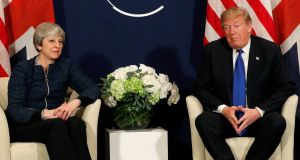 Theresa May and Donald Trump did their best to put on a united front at the World Economic Forum in Davos in the first meeting of the two leaders since Mr Trump came under criticism for retweeting last year material from the far-right group Britain First.

Mr Trump opened his short remarks, which came ahead of a bilateral meeting between the two leaders later on Thursday, by saying there was a “false rumour” he wanted to correct, stating that he had a “great respect for everything [the UK is] doing”.

Relations had previously been strained not just by Mr Trump’s tweets, but by his decision to cancel a visit to London to open the new US embassy, and by comments he made in the aftermath of the attacks in London and Manchester last year.

The US president on Thursday sought to focus on the trading and military relationship between the traditional allies.

He predicted US-UK trade talks would spark a “tremendous increase” in trade between the two countries.

“Trade is going to increase many times,” he said. “The trade concepts and discussions...are going to lead to tremendous increases in trade between our two countries which is great for both in terms of jobs and we...are starting that process pretty much as we speak.”

He also spoke about the importance of military collaboration between the longtime allies, describing the UK and US as “very much joined at the hip when it comes to the military”.

“There is nothing that would happen to you that we won’t be there to fight for you.”

Mrs May’s comments stuck to the trading relationship between the countries. They would “continue to have that really special relationship standing shoulder to shoulder”, she said, stressing that “the UK and US both do well” out of a good trading partnership.

Separately on Thursday, Mr Trump for the first time opened the door to the US rejoining the Trans-Pacific Partnership a year after making withdrawing from it one of his first acts in office.

“I’ll give you a big story. I would do TPP if we made a much better deal than we had,” he told CNBC in an interview Thursday on the sidelines of the World Economic Forum in Davos.